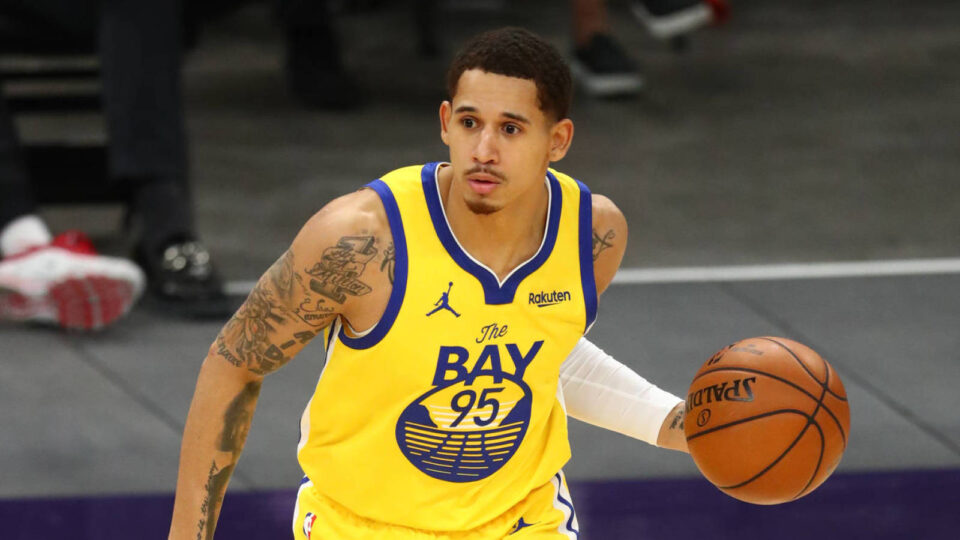 As time expired in the third quarter, Warriors small forward, Juan Toscano-Anderson, rose up from behind the arc and drained his first three-pointer in a blowout loss to the Memphis Grizzles. Toscano-Anderson who started at points this season came off the bench in game five of the conference semi-finals giving the starters needed rest before the start of the next game. His team-first, do anything to win, mindset is one of the reasons why he became a favorite in Oakland and for his hometown team, but unlike most players, his journey to the NBA started in a classroom and not on a court.

Toscano-Anderson grew up on 95th avenue in East Oakland in one of the most dangerous neighborhoods in the city, known to locals as the killing zone. From a young age, he had to learn how to navigate gang violence and drugs, while his mother worked to find permanent housing.

“Coming up in the part of the town that I came up in, it almost feels like you’re in that book, ‘Where the Wild Things Are,” Toscano-Anderson said. “You’re running into all these different monsters, only they’re things like gangs and drive-by shootings,” he told the San Francisco Chronicle.

In the third grade, he transferred to Montclair Elementary School, after a student threatened to stab him.

It was here, in Mrs. Attles’s third-grade class, that Toscano-Anderson’s life changed forever.

She saw that he was quiet and reserved in the classroom, but would come alive when playing basketball with his friends. She suggested that his mom, Patricia, sign him up for a Warriors’ youth basketball camp. When she explained that the family could not afford the camp, Attles said she would take care of it. Attles knew great basketball potential when she saw it. Her husband, Al Attles, was a Warrior’s legend, playing with the team for over a decade.

Mrs. Attles used her connections to send Toscano-Anderson to the camp free of charge. This one act of kindness would change the trajectory of not only his life, but his family’s as well.

After attending the camp his passion for basketball grew into a fire for the game. By the time he reached high school he was a coveted four-star recruit, leading Castro Valley High School to the Northern California Division I title game and a 30-2 season. After high school, he accepted a full scholarship to play basketball at Marquette where he became a role player scoring 3.8 points per game in his career.

After graduating with his degree in criminology in 2015, he got an offer to play basketball in Mexico in the LNBP.

It was here that Toscano-Anderson showed his true potential, becoming a two-time league champion, two-time all-star, and a league MVP.

With these accolades added to his resume, he decided to forego a lucrative salary abroad and try out for the warriors G league affiliate, the Santa Cruz Warriors.

After a season in the G League, he was called up to play with the Warriors. Check out some of his highlights below.

On May 21st, 2021, Toscano-Anderson was signed to a full-time contract in the NBA, making him the first Warriors player to attend a warriors camp as a kid.

Since joining the league,  Toscano-Anderson has made it a point to hold basketball camps like the one he attended in both Mexico and in Oakland, hoping to make an impact on kids who may be struggling just like he was

So far this playoffs Toscano-Anderson has embraced his role, coming off the bench and helping his team win any way he can. He recorded  9.0 points and 4.0 rebounds in two starts against the Nuggets, and five points in a game five loss to Memphis. Regardless of his role, he is always ready to contribute.

“Everybody from the top to the bottom matter.” he told reporters. “Energy matters. Your approach, your attitude matters. If I’m not playing, it’s my job to uplift my teammates, keep our cohesiveness together. I always just try to find something to bring to the table to be valuable in some capacity.”

if we know anything Toscano-Anderson it’s that he will do whatever it takes to help the Warriors come away with a win when they take on the Dallas Mavericks on Sunday night, but what is even better is what he does to set up the people of Oakland to win.