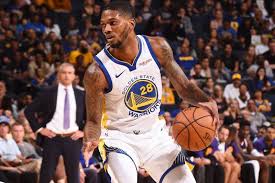 The name Alfonzo McKinnie may not ring a bell for anyone who is not a hardcore Golden State Warriors fan, but you have probably seen his face. He has been making his rounds on highlight reels across the internet. Unfortunately for him, it is because he was on the receiving end of a sick cross-over by All-Star point guard Damian Lillard that left him tumbling to the hardwood in game four of the Western Conference Finals.

Before McKinnie was getting crossed by one of the best point guards in the NBA and starting on the two-time defending champion Golden State Warriors, he was playing Semi-Professional basketball in Luxembourg with the East Side Pirates.

In a season with the Pirates, he averaged 26 points and 18 rebounds a game. The six-foot-eight Small Forward, struggled to stay busy during the day because most of his teammates had to work day jobs to make ends meet, leaving little time to scrimmage before games.

He also played professionally in Mexico before a $175 investment would change his life forever. In May of 2016, McKinnie, went back to his home town of Chicago to attend an open tryout for the Windy City Bulls, a G league affiliate of the Chicago Bulls.  The $175 tryout paid off, and McKinnie would not only make the team, but become a G League All-Star later that year.

A year after breaking into the league with the Toronto Raptors McKinnie found himself turning a two-way contract into a $1.5 million guaranteed contract with an option for the 2020 season. During this season, McKinnie was a role player averaging just 4 points and 3 rebounds coming off the bench.

With an injury to Andre Iguodala, Alfonzo McKinnie got the start in game four against the Portland Trailblazers and made the most of it. He scored 12 points in a hard fought 119 -117 overtime win to complete the sweep and help his team advance to the NBA Finals for the fifth straight year. After the game, teammate Draymond Green told reporters at The Mercury News that

“He was huge,” “He got off to a good start. He was able to knock a 3 down, and he got a baskets going to the rim for us, and he was good on the defensive end. Zo, he’s brought that energy for us all year.”While it is not yet known what role he will play in the finals, one thing is for sure, McKinnie is the personification of what it means to not give up on your dreams.