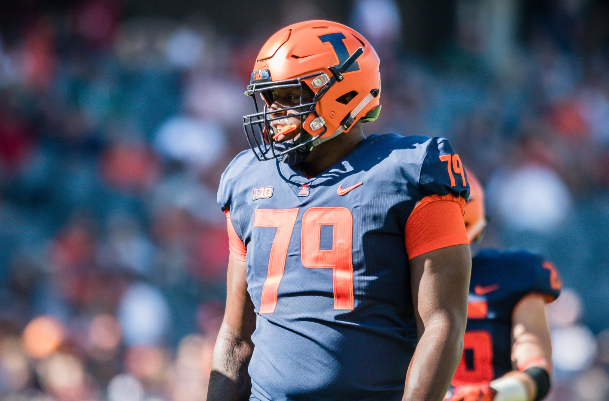 Vederian Lowe carries himself with a maturity far beyond his 22 years of age. The 6-foot-6,  320lb left tackle for the University of  Illinois knows that every time he is on the field he is not just representing his school, he is setting an example for his family.

Vederian Lowe made a name for himself while playing at Auburn High School, where he became a two-time conference champion and a back-to-back first-team All-NIC-10 selection. After high school, the Rockford native decided to stay home and play for Illinois. It was here that he met his wife Haylee. In 2019,  she had the first of their two children.

Balancing school, football, and a family hasn’t been easy, but Lowe says that that being a father has only made him a better football player and vise versa.

“I’ve learned a lot of lessons in being a football player and that transitions over to being a father,” he told Greater Than The Game.  “Every day I have to come in and work because every day when I come home I have to be a father and a great  husband every single day.  I can’t decide when I want to be an ok husband and when I don’t want to be.”

In addition to being a father, Lowe also became the legal guardian of his 14-year-old  brother Vydalis after their mom passed in  2019. Lowe hopes he can take the lessons he learned throughout the past four years and pass them down to his brother.

Lowe, who received the official news of the guardianship on July 20th, 2021, says that becoming  Vydalis’s legal guardian is something his mom would have wanted him to do.

“I know that my mother cared about us a lot and I think just that this is something that is making her happy. I know she is smiling down looking at us and seeing how  the relationship that me and my brother will  build these next few years is going to be something special.”

Lowe hopes to impart to his brother the lessons he has learned in football and in life and that have made him the person he is today.

“I want to teach him how to be a man. Teach him how to handle his business and teach him  that anything is possible. I’m a full-time student athlete, I have two babies at home and I try to dedicate myself to my craft, so I can be an NFL draft pick and have a career there. I want to let him know that anything is possible if you become resilient, stay consistent, keep your head down and work hard. You can achieve anything you want to achieve.”

In the 2021 -22 season, Lowe will return for his fifth and final year at Illinois. In his last season in Champagne, he hopes to build on a strong 2020 campaign where he was an All-Big Ten honorable mention. His season started off with a bang when he was selected to speak at the Big Ten Media Luncheon about his journey as a student-athlete and father. Lowe became the first Illinois player in 15 years to be selected for this event.

Vederian Lowe is not your average 22-year-old. This past season he would wake up at 4:45 AM,  get covid tested, go to workouts, go home, get his kids ready for the day and go to class. While his schedule is hectic, Lowe says that it’s his “why” that keeps him going through it all. His hard work and determination shows us what a strong “why” can do to push us to achieve greatness in any arena.

“Everything I do I do for my wife, my kids and my brother. They remind me why I do it. I think a lot of players lose sight of why they are playing football and get caught up in other things. I get to go home to my “why” every night and that keeps me grounded.”