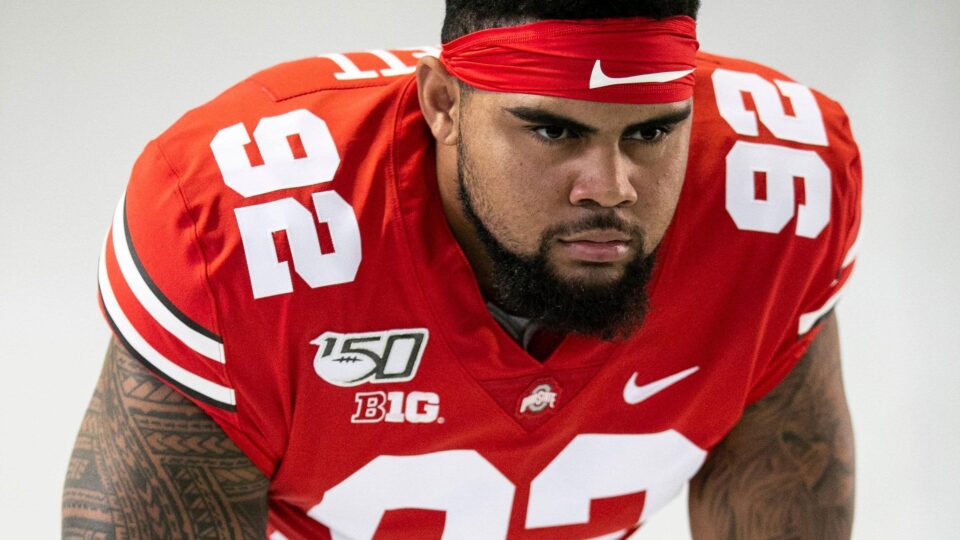 With stitches covering his face, Defensive Tackle Haskell Garrett spent countless hours in Defensive Line Coach Larry Johnson’s office, trying to learn the playbook and get as many mental reps as possible to be ready for the start of the 2020 football season. Unlike his teammates, Garrett was unable to physically practice due to being shot in the face in August of 2020.

On August 30th, Garrett was walking near campus when he saw a man and woman arguing. According to Garrett, the man began to get aggressive towards the woman. When he tried to intervene, the man pulled a gun and shot the 22- year-old Vermont native through both of his cheeks. Garrett then walked back to his apartment where his roommate called 911. At the hospital, he underwent surgery to repair the holes in his cheeks, and  get a bone graft in the back of his mouth. He was released the next day.

During his recovery, the 6′ 2″, 300 LB Defensive Tackle had to live off a liquid diet while waiting to replace five missing teeth.

Despite his injuries, Garrett was good to go in the Buckeye’s season opener against Nebraska on October 24th. In what Defensive Coach Kerry Coombs called a miracle, Garrett recorded his first career sack two months after being shot. Check it out below!

“You can’t (overvalue) the impact that has on his teammates and the defense in general, how he got back on the field in such a short period of time” Coombs said to the media after the game.

Throughout the season, Haskell Garrett would build upon his opening day performance, finishing the season with a career-high in tackles (17), solo-tackles (10), and sacks (2)

This all happened with a shortened five-game season due to COVID-19.

On New Years Day, Ohio State will take on Clemson in the Sugar Bowl for a shot at the National Championship. The game will be a rematch of last year’s Fiesta Bowl, where Clemson edged out Ohio State by six points. Be sure to catch the game at 8:00 EST on ESPN.

Garrett has had an amazing comeback.  He tried to do the right thing and help somebody and it could have ended his career and his life. Instead, he used it to transform his football legacy.

My story is still being written,” Garrett told Buckeye Xtra . “All those people that endured my journey with me, it’s just so gratifying. That sense of success, it’s not just mine. It’s everybody’s. It’s like an investment. It’s paid off. Everything that my family and everybody around me has gone through, it’s just overwhelming.”