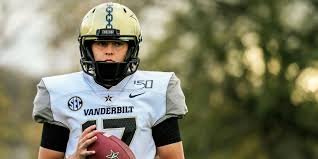 2020 has been a historic year in sports. The Covid pandemic has changed the sports world in ways sports fans could never have imagined. Home games without fans, the cancellation of March Madness and other events, and a shortened MLB season. 2020 has been a whirlwind of craziness in sports. However, it hasn’t been all bad. Covid- 19 has also brought to light some good that we wouldn’t usually see. One of the coolest stories of 2020 has to be Sarah Fuller, a goalie on the Vanderbilt soccer team, who made history on Saturday by becoming the first woman to play football for a Power 5 college football game.

Before she made history on the football field, she was fighting through adversity on the pitch. In her Freshman year at Vanderbilt in 2017, she broke her foot and missed the season. The next year she slipped a disk in her back and missed a second consecutive season. In her junior year, she sat as a backup, and in her final season as a Vanderbilt Commodore, she didn’t win the starting job until the fourth game of the season.

She didn’t give up, and that decision paid dividends. In her senior season, she had 28 saves and a .097 goals-against average, which tied her for the 8th best in school history. Her season concluded with a bang after the Commodores defeated Arkansas in the SEC Championship 3-1.

Shortly after the SEC Championship game, Fuller was approached by the football coaches and offered a spot as the team’s placekicker. The team’s kickers were all in quarantine due to Covid-19, and the school doesn’t have a Men’s Soccer team.

To start the second half of Vanderbilt’s 41-0 loss against Missouri, Fuller launched a 35-yard kick with no return. With this kick Fuller became the first woman Sin the Power 5 Conference to play in a game, and she joined two other women to play in an FBS game.

After the game, Fuller was asked what message she wanted to send to the girls watching at home. This was her response.

“I just want to tell all the girls out there that you can do anything you set your mind to, you really can, and if you have that mentality all the way through you can do big things.”

Fuller is right. With a mindset like that, there is nothing we can’t accomplish.