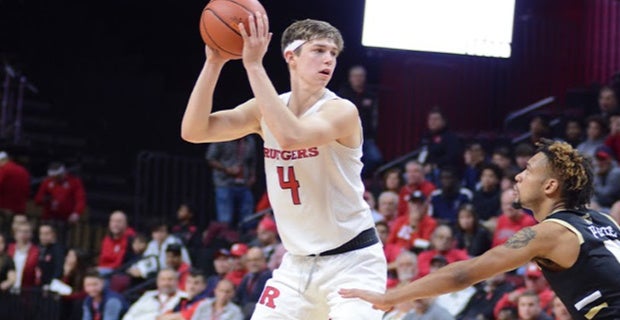 The poem, The Road Not Traveled, was written in 1915. Over 100 years later, the idea of taking the road not traveled and doing things no one has ever done before still resonates with many. One of those people is Rutger’s Point Guard Paul Mulcahy.

Standing at 6 foot 6, Mulcahy doesn’t look like your average Point Guard. That is because he’s not.  In his Freshmen season at Rutgers, he dazzled fans and frustrated defenses with no-look dime passes and pinpoint shooting reminiscent of his favorite NBA player, Rajon Rondo.

While at Gill St Bernard’s High School, he made a name for himself with his on the court tenacity and unselfish play. In his senior season, he became the first player in over 25 years to average a triple-double. He was also named as one of the top 30 players of the decade by NJ.com.

The Rutgers Scarlet Knights had an historic season last year. Their 20 win season would have earned them a March Madness bid for the first time since the early ’90s. As a true freshman, Mulcahy made his mark. He was second on the team with 61 assists. He finished the season shooting 58.5 percent from two-point range. This was 10th in the Big Ten. In his freshmen season, Mulcahy says learned a lot.

“The whole season was a huge learning experience”, he said. “I learned about myself, my teammates, basketball and school. I want to take everything I learned last year and implement it into the summer and next year.”

What may be even more impressive than Mulcahy’s on the court feats may be how he is trying to help people off the court. In May, he launched the Grateful4 Foundation and the #grateful4challenge. This challenges people to go on social media and post four things that they are grateful for, tagging  four people people and the #grateful4challenge in the post. Mulcahy hopes that it will begin to spread gratefulness and positivity across news feeds everywhere. Checkout some percipients of the challenge below.

The inspiration for the foundation has stemmed from his experiences in high school and college that showed him how similar people are.

“People are a lot more alike than they think they are or talk about. The emotion of gratitude is something that anyone can connect with; It doesn’t matter your age, gender, race, or socioeconomic status. Everyone can take part, and I think it’s pretty special bringing people together and spreading positivity. “

Mulcahy hopes that by the time he is finished at Rutgers, he will be remembered for his character and not just his play.

“I would rather be a good person than a good player. I want to win as much as possible and put the school in a position it hasn’t been yet. From a personal note, I want to help people,” he added.

Mulcahy hopes to grow The Grateful4 Foundation beyond the challenge to an organization that will help people monetarily in addition to spreading joy, gratitude, and unification.

Not many people have accomplished what Paul Mulcahy has done on the court or even attempted to make a difference off the court. To achieve the goals he has for basketball and his foundation, he has to keep doing what few people have done before, but he is no stranger to that.

“Every decision I have made or place I go, I have always taken the road less traveled because that is where you can gain the most.”