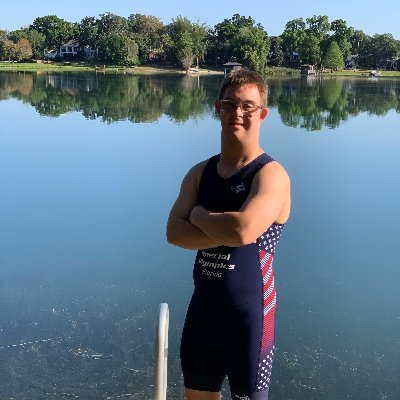 What is the Iron Man?

The Iron Man is an endurance competition where athletes swim 2.4 miles, bike 112 miles and finish off the race with a 26.2 mile marathon. As if that’s not hard enough, the competitors have 17 hours to complete the course.

Up until Nikic  was 18,  he and his parents accepted the status quo of his diagnosis. His parents told Runners World that they had been inundated by negativity connected to their son’s perceived limitations.

His father stated “ Honestly, I was influenced by a lot of negative perceptions and negative advice his first 18 years of Chris’s life, by all the professionals. I think of all the other parents like me when their child is first born with Down Syndrome and they’re barraged with all kinds of negative information… about what their kids are not going to be able to do. Nobody talks to them about what they could do if they set their mind to it.”

Last year, something changed their minds.

The Special Olympics was running a pilot triathlon program and the Nikic’s decided to try it to help their son both physically and socially. As he trained,  Nikic got stronger. Last October he completed a 1000 meter open water swim. After this particular race it is tradition for athletes to sign a nearby house wall. On the wall he wrote:

His dad stared at those words and thought about the possibility of living them out.

On November 7, 2020, Chris  Nikic  completed The Iron Man in 16 hours and 46 minutes, just 14 minutes before the cut off. He did face some challenges during the race; he fell off his bike and was attacked by ants, but that couldn’t stop him from making history.

Now his sights are set on even bigger goals. He and his  triathlon teammates have been invited to represent the state of Florida in the  USA Special Olympic games in 2022. He has also earned a spot in the Ironman World Championship in Kona, Hawaii, in October 2021.

Is there something you want to do, but you have been putting it off? Is there something you’d like to do, but think that you can’t do it? That it’s too hard or you’re not strong enough or smart enough or “something” enough? Maybe its a business or a physical challenge or maybe its just being a better version of yourself. Maybe, we have to stop looking at our goals from a macro perspective. Nikic put this in the simplest of terms when speaking to Runners World  “It’s easy to be successful because I only have to get one percent better each day.”

While the process may be slow Chris Nikic is proof that it will payoff in the end.