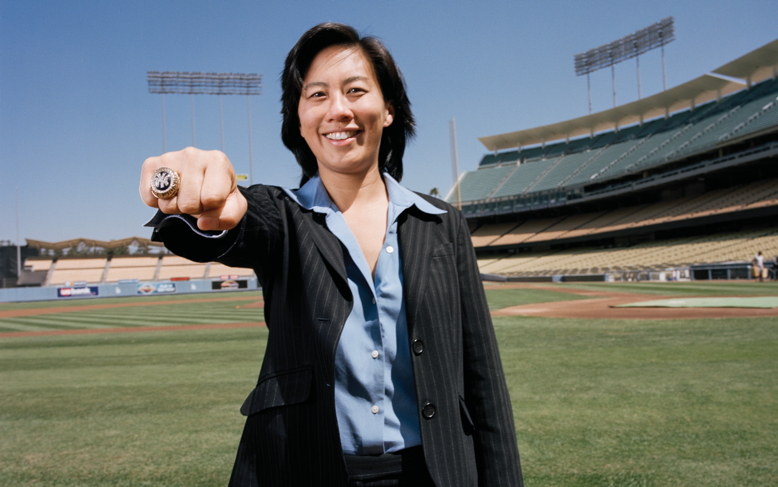 “When I got into this business, it seemed unlikely a woman would lead a Major League team, but I am dogged in the pursuit of my goals.”

In 1990, Kim Ng started her career in the MLB.  At the time, it may have seemed unlikely that a woman would rise to become a major league team’s General Manager, but what seemed like a far off dream has finally turned into a reality. As of November 13th, 2020, Ng made American sports history after being named General Manager of the Miami Marlins.

Living in Queens, New York, for the first 12 years of her life, Ng was first introduced to baseball fundamentals by playing stickball with her father. Years later, these skills would translate to the softball field. She played softball for the University of Chicago, where she played shortstop and third base for the team while earning her degree in public policy.

After graduating, she worked in the front office of the Chicago White Sox for six years. She worked for the MLB league office for a year. Then She moved on to the Big Apple, where she served as assistant GM under Brain Cashman for four years.

Following her time in NY, she then moved to the west coast, where she served as the Vice President and assistant GM for the LA Dodgers. After that, she moved up in the organization to become the Senior Vice President for baseball operations.

Now Ng has the biggest test ahead of her; turning around the Marlins who had two straight 100 loss seasons before making the playoffs for the first time in over a decade in the 2020 season. NG doesn’t want to turn the Marlins into a perennial playoff team, she is going for it all.

“My goal is now to bring championship baseball to Miami.” she said in a statement.

The CEO of the Marlins, Derek Jeter, a guy who knows a little bit about championship teams, had this to say about Ng’s hiring.

“We look forward to Kim bringing a wealth of knowledge and championship-level experience to the Miami Marlins,” Jeter said in a statement. “Her leadership of our baseball operations team will play a major role on our path toward sustained success. Additionally, her extensive work in expanding youth baseball and softball initiatives will enhance our efforts to grow the game among our local youth as we continue to make a positive impact on the South Florida community.”

Ng’s journey to being the league’s first female GM has been a long one, but she has picked up valuable skills that would qualify anyone for the job throughout the journey. Her career is a testament to hard work and dedication. No matter what your dream is or how far-fetched it may seem, go after it! Kim Ng did, and it will impact the sports world for years to come.