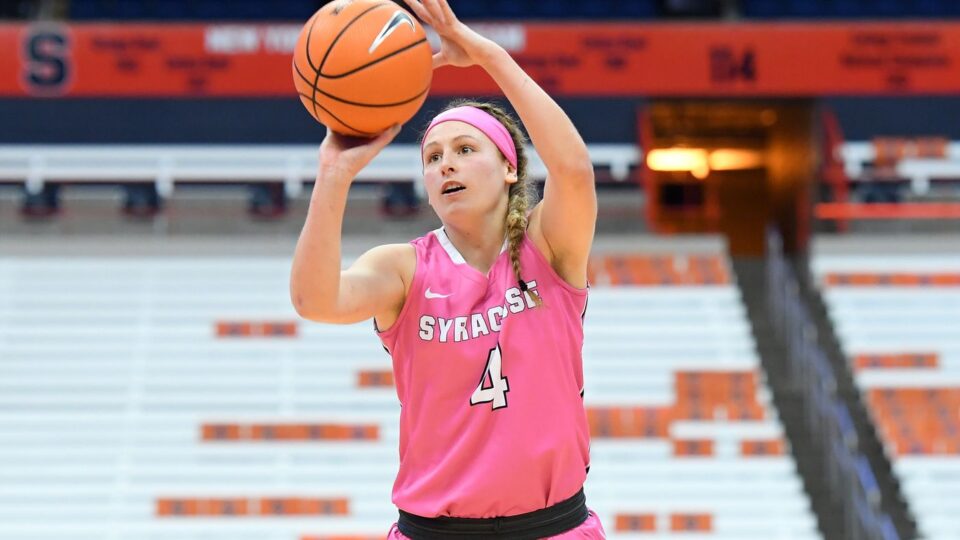 “Dear basketball, I met you when I was five and we have been on this journey together for 19 years and I know we will be doing life together for many more. Although we are on a break right now, I know you will be the biggest part of my comeback journey. You’ve brought so many blessings to my life and have taken me on an adventure of a lifetime far from home in Australia, Kansas and now Syracuse. I miss you and love you and will be back soon.”

Syracuse Women’s basketball player Tiana Mangakahia wrote these words while battling Stage 2, Grade 3, Invasive Ductal Carcinoma in the summer of 2019.  At just 24, the Australian-born point guard underwent a double Mastectomy and numerous chemo treatments, with the goal of returning to the hardwood.

Tiana Mangakahia is Coming to America

Before arriving in Syracuse in 2017, Tiana Mangakahia was recruited to play basketball for a junior college in Kansas. She was a rising star in her home country, leading the Australian under-19 team to a bronze medal in international play. She had even signed a professional contract with an Australian women’s basketball league team before deciding to take her talents stateside.

The only problem was, once she moved, she was told she wouldn’t be eligible to play college basketball because of her time as a professional athlete. She would have to sit out her first two years and hope for the best.

Even though she was unable to play in the regular season for those two years, she continued to improve her game through practicing with the team and taking on a more strategic role as a player. She would continuously be analyzing the defense for any weak spots that her team could exploit while she was on the bench.

In preseason games, she was allowed to play and that’s when Division 1 scouts began to take notice. Without playing a single regular-season game, she was ranked as the No.1 junior-college recruit by ESPN.

A Star is Born

Although she had many offers, Mangakahia signed with the Syracuse Orange. The school worked hard to reinstate their newest recruit. After sitting out back to back seasons, she was granted three years of playing time.

As soon as she stepped on the court, she proved she was worth the wait. In her first two years with the Orange, she set the record for career assists. She also became the fastest player in Syracuse Women’s Basketball history to reach 1000 career points. After two solid seasons, Mangakahia had to take the 2019-20 season off because of her diagnosis.

On November 29th, 2020, Tiana Mangakahia suited up for the first time in 615 days as the team took on Stony Brook in the season opener. In 37 minutes, she had 16 points with three assists and eight rebounds.

Check out this video of her first assist.

?: The most anticipated assist in @ncaawbb. TIANA. IS. BACK.

Playing for the first time in almost two years was the culmination of a lot of hard work, determination, and most of all, grit. After the game, she tried to put her feelings into words, telling Syracuse.com

“I was very emotional, and I couldn’t believe this day was here.”

In the first three games of the season, she has averaged 12 points and 5.5 assists and shows no signs of slowing down.

In a recent Instagram post featuring highlights from her first game, she gave followers a glimpse of her mindset moving forward

“Don’t just survive it, Conquer it. Felt so amazing to be back on the floor with the girls. The best is yet to come.”

So far in her short college career, she has beat breast cancer and distinguished herself as one of the best Syracuse Women’s basketball players in school history. She is living proof that she is more than just a survivor. She is a conqueror!