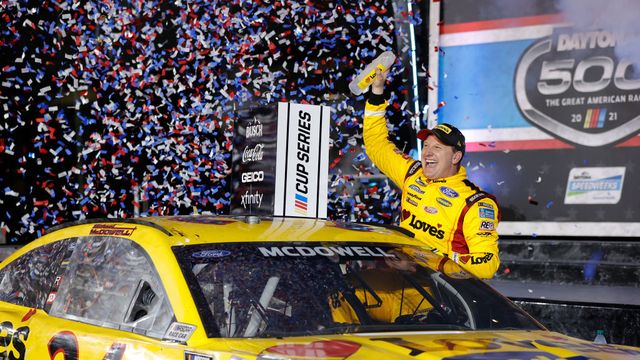 The name of the game in NASCAR is speed. Everything from how the cars are designed, to the strategy on the course, is implemented to give a driver a leg up in the competition, no matter how small. Even if it means driving just inches away from the bumper  of the car in front of you at upwards of 200-miles-per-hour. In the closing seconds of the 2021 Daytona 500, Michael McDowell  found himself doing just that, sitting in third place. The 100-1 underdog seized his place in racing history when a maneuver by the car in second place made both the first place and second place car spin out, leading to a McDowell victory.

Michael McDowell’s journey to winning the Daytona 500 began at the age of three when he started competing in bicycle  motocross races . Twenty years later, he  would find himself competing in NASCAR races across the country.

Although McDowell has has a 13 year career in the sport, it has been a challenging road for the veteran.  Like many racers on small teams, he struggled to find financing to really give him the resources he needed to compete with the rest of the field. Many times, he would be forced to pull out of races early due to lack of funds to finish . Within the sport this is known as start-and park.

Looking back on that time McDowell told reporters that he was just eating Ramen and barely getting by. On the track, things weren’t much better.

“When you show up to the racetrack and you know that you’re — I don’t even know how to say it — you’re just in the way, taking up space, it’s hard to do that year after year and week after week,” McDowell said. “So you’ve got to have a bigger purpose than that. For me, it was knowing that I would get an opportunity eventually.”

Although McDowell was 0 in 357 in Cup starts, he had been gaining momentum. For the past four years he had finished in the top ten in the Daytona 500. Even though he knew the odds were against him, he knew that if he was able to finish strong he could do something special.

The Daytona 500 track is 2.5 miles and the racers must complete 200 laps or 500 miles. This usually takes around three and a half hours to complete. Unfortunately the race was delayed for five hours due to rain, just 15 laps into the race

Although many of the top contenders were taken out in a crash proir to the start of the rain delay, the race was still exciting coming into the last lap.  Check out  McDowell’s thrilling path to victory below.

After the race an ecstatic McDowell reflected on his hardships throughout his career and had some poignant advice for anyone who is struggling both inside and outside of his sport.

Don’t give up,” he said. “I think that’s what it’s all about is just not giving up and just keep fighting hard. I think that that’s not just the moral of my NASCAR journey, but that’s the moral of everyday life.”