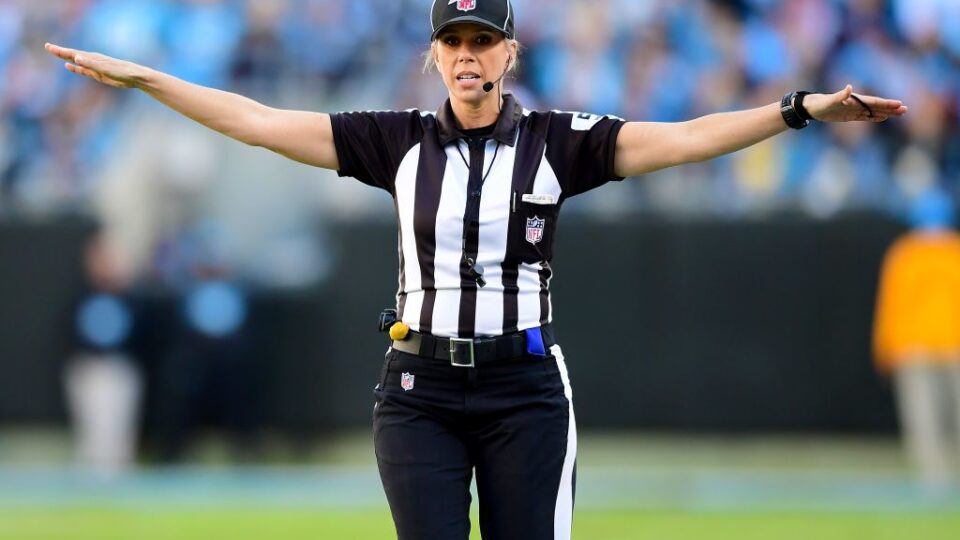 With all the excitement on Sunday night, you might have missed her standing on the sideline trying to look inconspicuous with her ponytail coming out of the back of her black hat. Sarah Thomas was quietly making NFL history. When the game was over, Tom Brady was hoisting the Lombardi trophy for the record-setting seventh time, and Sarah Thomas had become the first female to officiate a Superbowl.

Thomas is no stranger to sports. She was a college basketball,Academic All-American for the University of Mobile, Alabama. There, she ended her basketball career  5th on the school’s  all time steals list with 108. After college she missed being involved in the world of sports and decided to accompany her older brother to a football referee meeting. After that, she was hooked. She started out officiating Peewee games in 1999. Within a few years she moved up to middle school games, and while she was pregnant, she worked the clock at varsity games.

Moving up the ladder

After officiating a state championship, Thomas thought she would retire, but in 2006 she was offered an opportunity to work at the college level. Her time in college football was filled with firsts. She was the fist woman to officiate a  nationally televised game in 2007  and a Bowl game in 2009.

In 2015, Thomas got called up to the NFL. After six years of working in the NFL, she got the call to officiate Super Bowl LV . Reaching The Super Bowl is just as big of an honor for officials as it is for the players. They have reached the pinnacle of the sport  and are known as the best in the business.

In a speech in 2018, Sarah Thomas reflected on her nearly 20 years as an official. Her message was simple but important; do the  hard work.

“In life, people think that you don’t have to work hard to be successful, but the only time that success comes before work is in the dictionary. You have got to put the work in to be successful at whatever level that is. If you are constantly going through your life and your career and your family life comparing what you have to someone else, you are stealing the joy you should be blessed to have. If I compare myself to the guys, I am stealing my own joy. I am a woman, and I am not changing it. I have been blessed enough that they took recognition in my work ethic and my merit. My story impacting anyone means more to me than being a first.”

We salute Sarah for being known as one of the best in the business and for paving the way for women who come behind her.