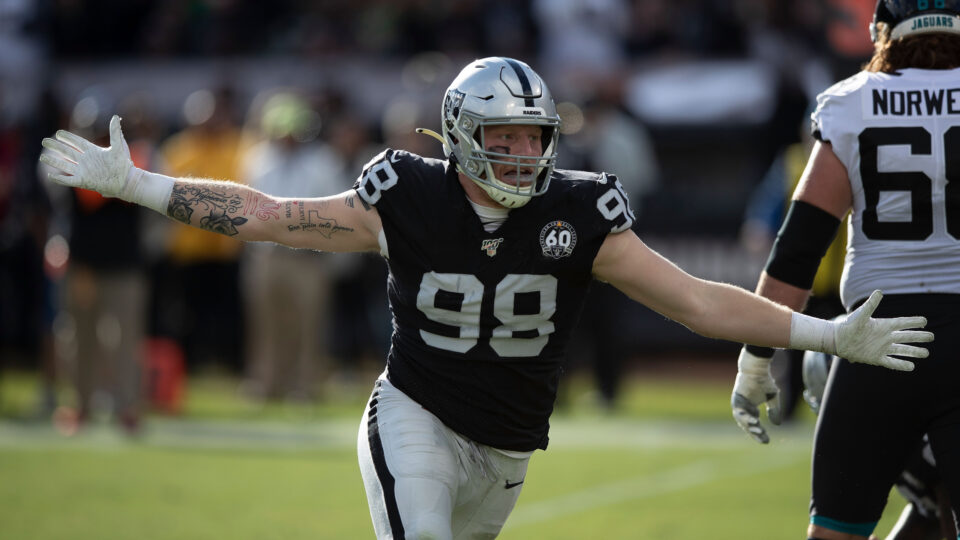 Last year was a challenging year for everyone around the world.  Las Vegas Raider’s defensive end Maxx Crosby was no different. Two days before the country went on lockdown he made a decision that would change his life forever. On March 11, 2020, Crosby checked himself into rehab and began his journey of sobriety. He knew the road would be challenging, but he never shied away from a challenge.

Crosby is from the Dallas Fort Worth area, an area known for its powerhouse high school football. Crosby played for Colleyville Heritage High School and would face off against some of the best competitors in the country every Friday night. In his first three years of high school, Crosby was a middle linebacker, but before his senior season, he literally outgrew the position. He grew three inches and by the time his senior season started, he stood at six-foot-five. With this new size, Crosby was moved over to defensive end.

Although he played well in his first year in the position, he only drew one Division 1 offer, from Eastern Michigan. He took it and never looked back.

In his first year at EMU, he redshirted and worked on the scout team to improve his knowledge and skill at the position. By the end of his redshirt freshmen season, he earned scout team Player of the Year and was ready to make a big impact when he got his shot on the gridiron.
He did not disappoint. Over the next three seasons, he would have 18 sacks and 162 tackles while becoming a two-time First Team  All-MAC Conference selection.

Despite great numbers, his college career scouts told him not to declare for the NFL because he wouldn’t be selected in the early rounds.

Despite being told to return for his senior season, Crosby entered the draft and was selected in the 4th round of the 2019 draft. With the Raiders selecting Clelin Ferrell, a defensive end out of Clemson as their 4th overall pick, no one expected Crosby to have a huge impact in his rookie season, but once he got his shot coaches couldn’t take him off the field.
In the 2019-2020 season, he had 10 sacks, a half a sack away from the Raider’s all-time rookie record. To put this number in perspective, the season before, the Raiders whole team had a combined 13.  He also stood out among the NFL  with the second most sacks among rookies. With such ferocity coming off the edge, Head Coach John Gruden gave him the fitting nickname of Mad Maxx.

To an outsider looking in, everything looked to be going Crosby’s way after his tremendous rookie campaign, but off the field, he was struggling with alcohol.

“It got to a point after my rookie year my life became unmanageable,” Crosby told ESPN. “Alcohol, partying and all that s— became too much of a distraction in my life.”

Crosby decided to leave for rehab on March 11th, 2020, and stayed there for the next 30 days. He told the Bussin With The Boys Podcast that after going to rehab and a sober living facility he now has a “program” to follow, and he is not the only one. Star tight end for the raiders Darren Waller has been sober for three years and follows the same program as Crosby.
Crosby said that the support system of Raider’s players like Waller has helped him on his journey thus far.

When he was back on the field for the 2020 season he continued to be a menace to opposing quarterbacks racking up 7 sacks. So far this season he has continued where he left off. Just two games into the 2021 season he leads the league in most pressures by a pass rusher and most quarterback hits.
Now 18 months sober. Maxx Crosby knows his impact can be felt way beyond the football field. In March of 2021, he posted this to Instagram.

“I hope I can help somebody out there struggling by sharing my story. AA Has changed my life in so many ways & although I’m far from perfect I’m growing as a person day by day. Not only do I want to be the best football player I can be, I want to be the best person I possibly can be. My dm’s are open if anybody else out there wants to talk & I appreciate everybody in my circle who’s riding with me on this journey.”

We at Greater Than The  Game wish Maxx much success in his journey and in the 2021 season. If you or anyone you know is struggling with addiction, please reach out for help or call the SAMHSA’s National Helpline at 1-800-6