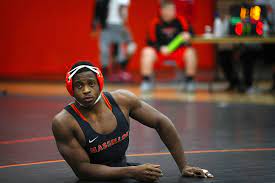 It took less than five seconds for Zion Clark to etch his name in the Guinness book of world records. Over those 4.78 seconds, he traveled 20 meters. If you are unimpressed, he did so just using his hands.

Clark was born with Caudal Regression Syndrome, a condition that caused him to be born without legs. This condition is very uncommon and only affects 1 out of 100,000 people. Those odds also created an uncommon person.

The early years were a struggle for Clark. He was put up for adoption and was in the foster system for the first 16- years of this life. Clark told the Ellen show, That  While in foster care, he was abused mentally and physically and bounced around from home to home.

Finding a Place on the Mat

With an unstable home life, Clark found solace on the wrestling mat starting in elementary school. Growing up, he was forced to use prosthetics while at school, but he could move freely without them on the Wrestling mat.

When he was 16, he was adopted by his now mother, Kimberly Hawkins. With a support system behind him, he continued to put in the work in the gym. Although Clark didnt have the use of his lower body, he quickly became one of the strongest Wrestlers on his high school team.

At the end of his senior year, he had a 33- 15 record and was set to attend Kent State to wrestle and study architecture.

Soon Zion was no longer just well known in his home state of Ohio but would impact people worldwide.

In 2018 he started in a Netflix short aptly named “Zion” the Film documented his Senior season and gave a window into how he approaches life.

Clark’s athletic success was not confined to the wrestling gym. In 2016 he started competing in Wheelchair racing and won a state title in the 400 and 800-meter races in that same year.

In late September, after posting a video of him running on his hands to his Instagram, he was encouraged to go for the world record for the fastest 20 meters running on your hands. Check out his video from the Guinness book of world records below.

In the future, Clark hopes to represent the United States in both the Olympics for wrestling and the Paralympics for track.

With all that he has achieved thus far, it wouldn’t be surprising to see Zion Clark on an Olympic podium in the near future. That’s it for this post. If you like what you read, you can follow us on Instagram and Facebook using the buttons above. If you would like to help us create more inspiring content, you can donate to Greater Than The Game using the button at the bottom of the site.