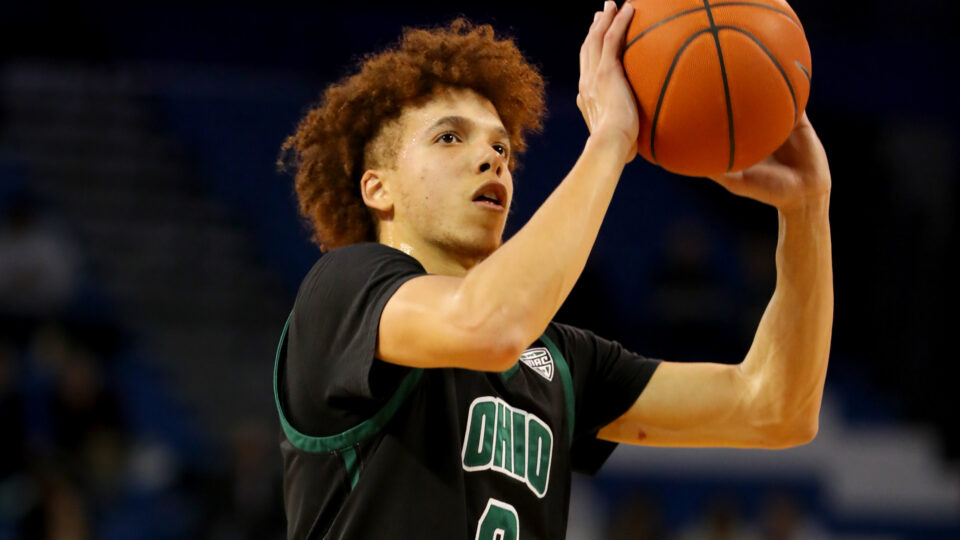 Ohio University guard Jason Preston’s favorite quote is “let your ambition carry you.”  While the message behind the quote may be simple, Preston has made an effort to put it into practice each day of his life. In five years, his ambition has carried him from a high school player who scored only 52 points in his high school career to declaring for the NBA draft. The best screenwriters could not have written a better movie script.

Jason Preston had always loved sports. Growing up, he would spend hours watching tennis, baseball and basketball with his single- mother, Judith. Although Preston liked the other sports, basketball and the Detroit Pistons were his first love. When Preston was 16 years old, his mom died of lung cancer, forcing him to navigate his teenage years with his aunt and cousins as his only family. Preston would always tell his mom about his dreams of playing after high school, but as he finished his senior year at Boone High School in Orlando, it looked like that dream wasn’t in the cards. As a senior, he averaged just two points per game and was undersized, standing at 6-foot and weighing only 140 pounds.

Reflecting on his mom’s death and the challenges he had to overcome, Preston shows a unique outlook far beyond his 21-years of age.

“It’s always your response to things in life that really matters,” Preston said. “You can let bad things tear you down, and you can have a negative outlook, but that’s not going to help you at all. So keep pushing, keep fighting, and know that ultimately everything happens for a reason, and it’s all part of God’s plan. I know she’s in a better place, so that can be a little bit comforting.”

After high school, he was ready to give up basketball and study journalism at Central Florida so he could stay around the game he loves. He had experience  covering his favorite team, the Detroit Pistons, for the site Fansided while he was in high school. He was all set to pursue that career path before one AAU tournament would change his life forever.

Taking Control of Your Future

Before leaving for college, Preston was asked to play on a friend’s AAU team because they needed a fifth. During the tournament, Preston proved that he could be way more than a guy to fill a roster spot; he could be a star. He played so well that college coaches who were at the tournament started to take notice. At the time, many teams were full of scholarships for the year, so he was encouraged to go to prep school.

Preston heeded their advice and decided to follow his dream of playing at the college level by playing at Believe Prep Sports Academy in Nashville, Tennessee. When he got to Nashville, he was placed on the school’s A team, but once again barely got the opportunity to produce at the level he was capable of. After not seeing the court on the A team, he asked to be sent down to the C team to get a better opportunity to play. After putting up solid numbers on the C team, Preston knew he wouldn’t get any looks from colleges without doing something. He collected all of his game films and had a friend put together a highlight reel for him to tweet. The reel went viral, and Preston got two Division 1 scholarship offers in his DM’s. After some consideration, he decided to take an offer from Ohio University

Check out the highlight tape that got him a scholarship here.

In his junior year at Ohio University, Preston has gained national media attention from his recruitment story and his stellar play. This season he averaged 16 points per game with 8 assists, helping his team reach a 16-7 record.

The Ohio University Bobcats showed they could be a force last year before Covid canceled the season.They continued their strong play this year and entered the MAC Conference Tournament as a 5th seed.in the tournament the Bobcats surprised many by running the gauntlet and beating No. 2 ranked Buffalo in the Championship game in the tournament to get them their first NCAA tournament berth in 9 years.

The team continued to stun basketball fans as they defeated the raining NCAA champions, the Virginia Cavaliers,  62-58 in the first round of the NCAA tournament. In this upset victory, Preston scored 11 points and led the team in assists with 8. Check out his highlights below.

Although the Bobcats would fall to Craton in the second round, Preston proved that he has what it takes to play in big-time games.

On April 26th, Jason Preston announced that he would enter his name in the 2021 NBA draft while leaving his options open to return to college ball if he is not drafted. While it is unclear what will happen when the draft comes in July, what is evident by his story, is the power we have to make our dreams a reality. Preston overcame so many odds to play college ball. He put the belief in himself and let his hard work and ambition do the rest.