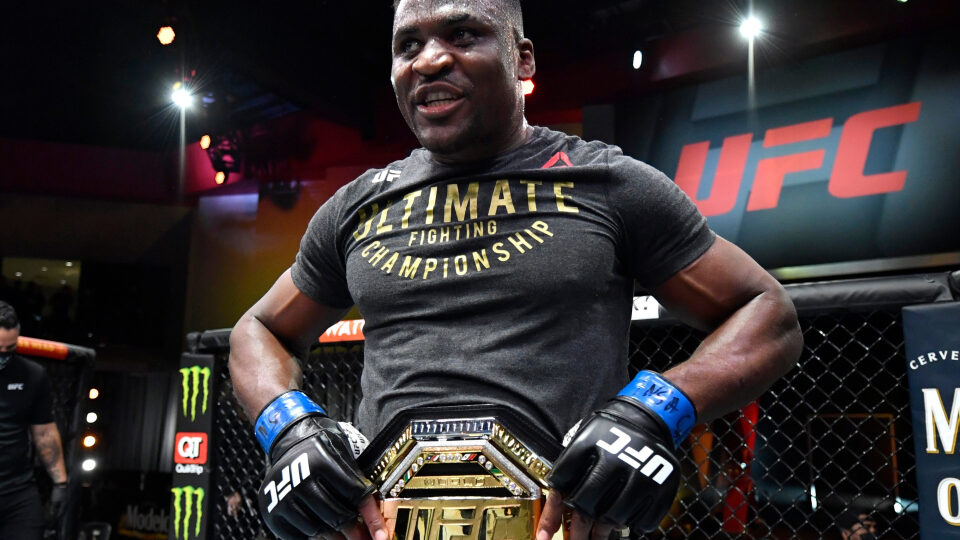 Standing at six-foot-four, 249 lbs Francis Ngannou, lives up to his nickname, the Predator. Ngannou has made a name for himself in the UFC by punishing opponents with brutal strikes leading to knockouts and submissions early on in fights. On March 28th, Ngannou became the number one heavyweight in the UFC, defeating Stipe Miocic to claim the heavyweight title, fulfilling a dream he set as a kid growing up in Batié, Cameroon.

The Journey to Greatness

Francis Ngannou’s story couldn’t be rivaled by any Hollywood script or author’s vision; he has traveled thousands of miles, been jailed, and been homeless, all in  the relentless pursuit of his dreams. In just six years, he went from an unknown to a World Champion.

From the age of ten Ngannou had been training, not to win a fight, but to survive. Growing up in a small village in Cameroon, his family had few options for income. To help his family make ends meet, Ngannou was sent to work in the local sand mines  on weekends and holidays from school. Ngannou told Joe Rogan,

“I hated the sand mines, I hated my life, but today I use it as fuel”

Check out this video below of Ngannou working in the mine on one of his trips home to Cameroon.

Ngannou worked in these mines until he graduated from school at 17. For the next nine years, he would have a stable job as a taxi driver in the area, but he knew he wanted more from his life. He knew he wanted to be a boxer like his childhood hero Mike Tyson. When he was 26, he decided to leave his family, job, and country to go to Europe to make his dream a reality.

The journey  would take over a year. He and other travelers would have to traverse the  Sahara desert with little food and water in a crowded truck, payoff border agents, and risk jail time if they were caught crossing the border illegally. When Ngannou reached the Moroccan border, he was severely injured trying to cross the border into Spain. While at the hospital, he was taken into custody by Spanish authorities and spent the next two months in jail. When he was released, he traveled to France in hopes of beginning his boxing career.

From Boxer to UFC Champion

Ngannou arrived in France with nothing but the clothes on his back. He spent the first few days looking for a gym to begin his training. After asking anyone who would listen, he found a small boxing gym in Paris. After telling the head coach that he was homeless and had no money to pay for training, the coach cut him a break allowing him to train for free and lending him $50 to get equipment. After seeing his potential, the coaches encouraged him to try out MMA. Although reluctant at first, Ngannou gave in and began training at the MMA Factory gym in Paris in 2013.

Within five years, he fought for the heavyweight belt, falling to Stipe Miocic in five rounds. Three years later, Ngannou would redeem himself, knocking out Miocic in the second round to claim the heavyweight title.

Check out the fight below.

Although Ngannou’s journey to the top of the UFC has been an unbelievably challenging one filled with obstacles most of us couldn’t fathom, he attributes his success, not to these experiences, but to something all of us possess.

“I don’t think I’m successful because I am a UFC Champion or because I have a car.” he told Areil Helwani after his title fight. “My perception of success is because I never gave up. I never let anything take my dream out of me. That’s my own success.”

Francis Ngannou’s dream  carried him from the sand mines of Cameroon to the heavyweight champion of the world. His story is a powerful reminder of what is possible if we don’t stop believing in our dreams.