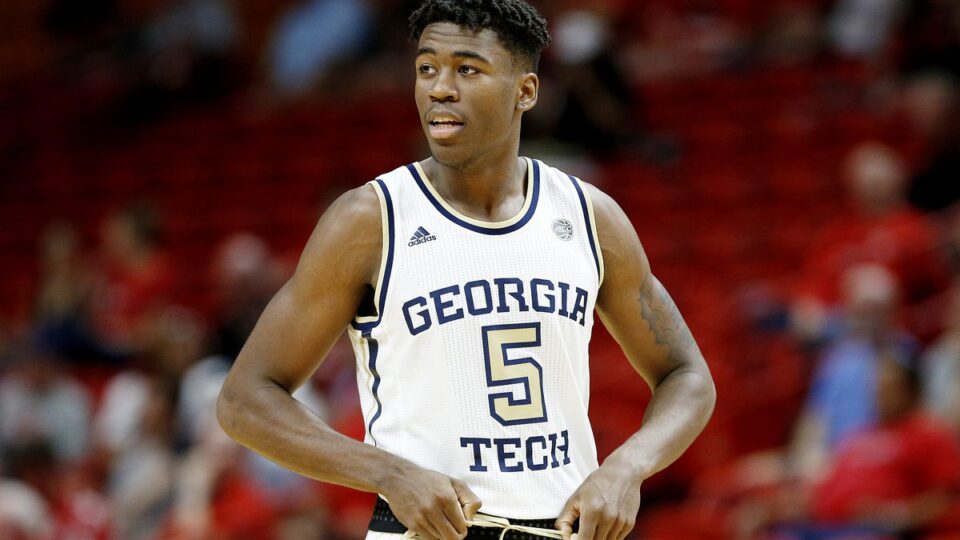 Georgia Tech Senior, Moses Wright, may be one of the most well-rounded basketball players in the country. Growing up, his passions were tennis, swimming, and playing stand-up bass in his school orchestra. While these interests may be atypical for a basketball star, rest assured that his stat line from this year is not. This season, he averaged 17 points and eight rebounds a game, along with shooting over 50 percent from the field, earning him the honor of ACC Player of the Year for the 2020-21 season. Just like his interests, his road to becoming an ACC Player of the Year was unconventional, to say the least.

Moses Wright always had the body for sports, but before he was pinning basketballs off the glass and posterizing defenders, he was using his tall frame to excel on the tennis courts and in the swimming pools across his home state of North Carolina.

When Wright was in 8th grade, he was spotted by a YMCA basketball coach as he left swim practice. The coach convinced him to try out for the YMCA team.

“I had just paid the money for the swim team, and he comes and tells me they put him on the team,” his mom Calla Wright said in an interview with Georgia Tech. “He said, ‘I’m on the basketball team and the coach wants to talk to you.”

Although Wright’s mom wanted him to continue swimming in hopes of her son earning a free ride to college, she allowed her son to pursue basketball. There was only one rule, Wright was not allowed to play in a game until his skills were up to par.

Wright’s mom paid for a basketball trainer, and the two went to work.

Just before Wright found basketball, he lost his father to a heart attack at 56 years old. Wright’s father was an avid tennis player and would love to watch both of his sons compete in sports. After the death of his father, his Mother saw sports as an outlet for her grieving son.

“For me to keep him moving with sports and to keep him grounded and engaged was really important for me to make sure that I wouldn’t lose him,. So sports was a factor that brought him around.” she told the news observer.

On the court, Wright continued to grind. His athleticism was good enough to earn him a spot on his high school JV team. However, he didn’t play in a game his first two years. In his junior year, he played on a home school team instead of the high school team and an AAU league to gain confidence in a=his game.

In his senior season, he made the Varsity team and proved that he was worth the wait. That season, the 6 foot 9 forward turned heads by averaging 21.5 points, 13.5 rebounds, and 1.5 blocks per game.

From Obscurity to All-Star

Although Wright was putting up great numbers in his final high school season, he wasn’t heavily recruited due to his lack of experience playing the high school circuit. Most player ranking sites had him listed as a zero-star recruit, Although he did have one 3 star ranking by 247 sports.

Coming out of high school, he only received one D1 offer from Georgia Tech.

In his freshman year at Georgia Tech, Wright played more than anticipated due to team injuries, but it wasn’t until The ACC tournament, his sophomore year, that he showed a glimpse of his full potential—scoring 25 points in a loss to Notre Dame. His Junior year, he nearly doubled his offensive output and proved he was a force to be reckoned with in the ACC.

In his final season with the Yellow Jackets, Wright and his team put it all together, going 17-8 during the regular season. In the ACC tournament, the Yellow Jackets upset the No.2 seed Florida State. In the Championship game, Wright had 15 points in the team’s five-point victory that secured them a spot in the NCAA tournament for the first time since 2010.

One of the biggest things we can learn from Moses Wright’s story is that it’s never too late to find your passion. Colonel Sanders didn’t start Kentucky Fried Chicken until he was 65. Vera Wang didn’t get into the fashion industry until she was in her 40’s and this year’s ACC player of the year didn’t score a varsity point until his last year of high school. It doesn’t matter what you have done in the past. If there is something you want to do, don’t let lack of experience stop you. Put in the work, and who knows, maybe one-day people will be writing about you.