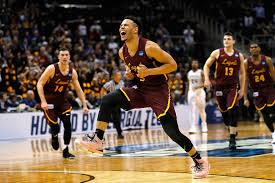 “Go forth and set the world on fire.” This command was given by St. Ignatius of Loyola, the founder of the Jesuits, a sect of Catholicism. Today these words are written outside of a basketball arena of a small college known as Loyola Chicago.

Three weeks ago it would be hard to find someone who could name just one player on the Loyola Chicago Ramblers roster. Today you would be hard-pressed to find a person who has not at least heard of the school.

Loyola Chicago has been the Cinderella story of the NCAA tournament this year. They have become only the third team in history to be ranked 11th out of 16 teams and make it to the Final Four. The way in which they have done so has captured the hearts of people all over the country.

The magic began in the first round of the tournament when the Ramblers took down No.6 Miami on a last-second three from senior Donte Ingram to win the game 64-62 and collect their first tournament win since 1985.

In the next round, the Ramblers won in similar fashion, taking down the No. 3 Tennessee on a mid-range jumper with six seconds to go in the game, winning 63-62.  Take a look!!

In the Sweet 16, the Ramblers faced No.7 Nevada. This time the tables were turned. The Ramblers hand to hold on to the lead as time expired, winning 69-68 and advancing to the Elite Eight.

n the next round, the Ramblers etched their name in the record books when they faced ninth ranked Kansas State.  These were the two lowest ranked teams to ever play in the elite Eight round. The Ramblers dominated in this game, winning by sixteen points 78-62.

Today, they will take on Michigan with hopes to advance to the National Championship.

Not only have the Ramblers been dominating on the court, but they have been killing it in media coverage thanks to a 98-year-old nun named Sister Jean. Sister Jean serves as chaplain to the team and even watches game footage and provides a scouting report for the team before each game. To read more about this nun who has taken the world by storm click here.

Changing the face of College Basketball

For the Ramblers, this isn’t the first time they have set the world ablaze. In 1963 the Ramblers would win the national championship, doing so in a way that would change the face of college basketball as we know it.  In the Sixties, college basketball was governed by an unwritten rule known as the Gentlemen’s Agreement. This meant that there couldn’t be more than two African American players on the court at one time.

Other rules were as follows

A year before the 1963 season, the Ramblers were unable to win a championship because they couldn’t have their four best players on the court. At the start of the 1963 season, then coach George Ireland, decided to break the rule and start four African Americans.

This was a big deal. Let me put this in perspective. This move was during the height of the civil rights movement. It also came a full three years before Texas Western would win the tournament with an all African American starting five.

With the team’s best players on the court, the Ramblers took off, going 21-0 in the regular season and scoring an average of 100 points in their first six games.

Ranked fourth in the nation, the Ramblers went to the NCAA tournament and demolished their first-round opponent Tennessee Tech, 111-42.

The game of change

In the second round, the team faced Mississippi State, a program who had forfeited the right to go to the tournament for three years running because it was illegal for them to play a team with any African Americans.

In 1963, the Mississippi team was court ordered to stay within the state, but snuck out with the help of a state sheriff to play in the tournament.

Before the game, the captains of the two squads met in the center of the court and

Jerry Harkness of the Ramblers and Joe Don Gold of Mississippi State shook hands and shocked the country. Harkness had this to say about the handshake to ESPN in 2012.

“When those flashbulbs went off — boom, boom, pop, pop — you felt the history of it right there,” Harkness said, “but I don’t think many people even know about it now. That game was key. I felt like it was the beginning of things turning around in college basketball. I truly believe that. I just don’t know how many other people know about it.”

The Ramblers ended up beating Mississippi State 61-51 and advancing to take on Cincinnati in the National Championship.

The National Championship game in 1963 marked the first time in history where two integrated teams played each other.

Just like Loyola Chicago today. the team won the game on a last second buzzer beater. Vic Rouse put back an air ball to win the game as time ran out. Take a look!!

So, there you have it. Now you know how a small school in Chicago has changed the game of basketball in the past and continues to challenge what’s possible today. Don’t forget to watch the game at 6:09 today. If you liked what you read, please subscribe below and share with friends. Be sure to like our Facebook page and to follow us on Instagram using the icons below.