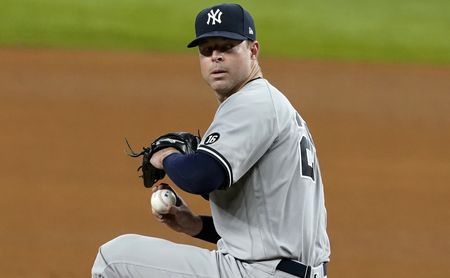 On July 26th, 2020, Texas Rangers pitcher Cory Kluber left a game against the Colorado Rockies with shoulder tightness after just one inning of play. He sustained a grade 2 tear of the Teres Major muscle in his shoulder. That shut him down for the remainder of last year’s shortened season.  Little did he know that he would be making MLB history with a new team the next time he would be on the mound in Arlington, Texas.

It took just 101 pitches for New York Yankees reliever, Corey Kluber, to make it through all 27 outs without allowing a hit. The game was the Yankee’s first no-hitter since David Cone’s perfect game in 1999.

The Emergence of Corey Kluber

Corey Kluber broke into the league with the Cleveland Indians in 2012. At the time, he didn’t seem like he had superstar potential, but that notion would quickly change. In 2013, he showed a glimpse of things to come when he became the first pitcher since 2004 to strike out 14 batters in back-to-back starts. He finished that season with an 11-5  record.

The next season he proved that he was one of the top pitchers in baseball by winning the 2014 Cy young award after having an 18 win season. Over the next four years, Kluber continued to dominate batters across the league. From 2016 to 2018, he made three straight all-star appearances and had three consecutive seasons with 18 or more wins and one more Cy Young Award.

Coming off of an all-star 20 win season in 2018, Kluber looked as though he would build upon that performance in the 2019 season. In his second start of the year, Kluber was hit with a comebacker on the mound that broke his arm ending his season. That offseason, he was traded to the Texas Ranger, but only played one inning before being placed on the injured list for the remainder of the season.

During the 2020 offseason, there were some questions as to whether Kluber could bounce back from his injuries and return to the player he was for the Cleveland Indians. The Yankees beat out the Redsox and Twins to sign Kluber to a one-year $11-million contract.

This season, Kluber has a 4-2 record and has shown flashes of his old self, but on Wednesday, he showed he was firing on all cylinders. He faced 28 batters, struck out six and only allowed one walk. This was the 6th no-hitter of the 2021 season and the fourth no-hitter of May in the MLB.

Check out Klubers last out below.

Kluber is known for keeping his emotions in check. After the game, he told reporters.

“It was a lot of fun. I think it was a special night,”

“I’ve never been part of one, witnessed one, let alone thrown one.”

His coach Aaron Boone, on the other hand, wasn’t as stoic. Boone admitted to getting emotional after the game even if his pitcher wasn’t. The third-year coach explained to reporters how special it was to see a player like Kluber work every day to reach his full potential.

“As hard as this game is and as humbling as this game is, I don’t care who you are, it’s going to knock you on your butt. But when you see guys that you’re grinding with every day go out and do something really special, you feel a part of that in a small way and it makes you happy.”

It was amazing and exciting to see a pitcher as good as Kluber add his name to baseball lore after talking almost two years off from the league due to injuries. Sometimes an injury can be a game-ender, but sometimes, it’s just a side road back to being one of the best in the game.