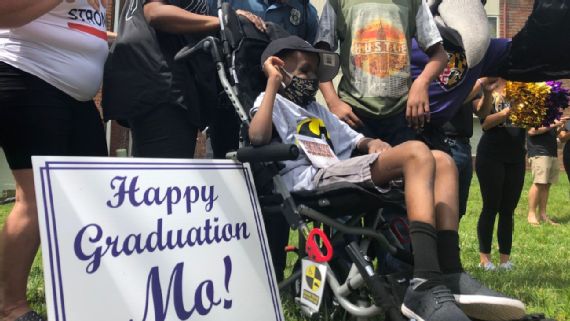 At the age of 14, Mo Gaba has spent an estimated 75% of his life in the hospital fighting cancer. Despite his cancer, he graduated from middle school in mid-June. Like many others who graduated in 2020, he had to celebrate a little differently, but it didn’t stop him from enjoying his day with some very special friends.

Mo Gaba burst onto the Baltimore sports scene at the age of 9 when he called into a local afternoon sports radio show to talk shop. From there, the city fell in love with him.

Gaba has a form of cancer called bilateral retinoblastoma which is a malignant tumor of the retina that has caused him to go blind. His lack of site has not stopped him in the slightest.

Last year he made history as the first person ever to announce a draft pick using braille. Gaba has had a profound impact on everyone he has interacted with. He developed a special relationship with Orioles outfielder/ first baseman Try Mancini after the two spent time together during the 2018 MLB All-Star break.

“Mo is, without a doubt, the most fearless and special person I have ever met in my life,” Mancini told ESPN.

On the day of his graduation, cars lined the street outside of his house. Some motorists had signs, others honked and cheered to help celebrate his special day. The Ravens band joined in on the fun, playing graduation music while cars passed by.

The highlight of the day was when Raven’s linemen, Bradley Bozeman, gave him a ball with the words “Mo Strong” inscribed on it.

Gaba gave the ball to his mother, Sonsy Gaba, saying that she deserved it.

“I wasn’t expecting all of this,” Mo’s mother said. “I know people love Mo, but this is beyond everything I could have imagined. This means the world to us.”

With everything going on in our lives, it is easy to take things for granted.

At 14, Mo Gaba has had four bouts with cancer. His most recent diagnosis found cancer had spread to his brain. Throughout his battle with this sickness, Gaba has shown strength and courage beyond his years. In 2019 he told reporters,

“Every morning when I wake up, I think I’m going to do something great. And there’s actually more to it, I actually pray that nothing bad is going to happen, and then when nothing bad happens, I’m OK.”

Everyone can learn a lesson from this young man. If we could all approach our day with the same attitude, we would have far fewer bad days.