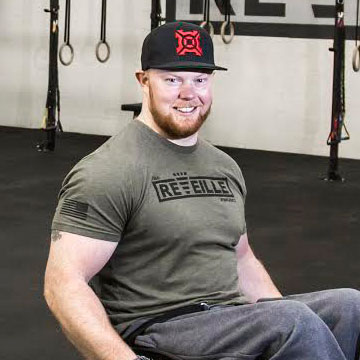 It was the last day of the OC Throwdown, a three-day weightlifting competition, and Kevin Ogar had one thing on his mind, winning the event and getting one step closer to the CrossFit games. Even though the event was not directly sanctioned by CrossFit, many previous winners had gone on to compete in the games.

All Ogar had to do was complete a 235 lb. Snatch. This is a basic lifting move where you lift the bar over your head in a squatting position and stand up.  It was a move that he had performed thousands of times, both as a competitor and as a coach in his gym, CrossFit Watchtower.

As he lifted the bar overhead and began to stand, he lost his footing due to a slightly slanted platform and began to fall backward.

At that moment he decided to bail out of the weight so he wouldn’t injure his shoulder. When he dropped the weight behind him, the bar hit a stack of 45-pound plates causing it to bounce up and hit him in the back. It was at that moment he knew that he was paralyzed.

The bar severed his thoracic spine leaving him without the use of anything below his belly button.

Reflecting on the event almost five years later, Ogar said he felt the hand of God as soon as the accident happened.

“If you look at my story you can see the coincidences that kept me alive. One of my friends there was an EMT. She kept me from thrashing which usually kills people with my injury. The spinal surgeon (at the hospital) wasn’t supposed to be there. He came in to check on something else and took my case when he wasn’t supposed to. He happened to be the second best spinal surgeon in the country. Anyone else does my surgery, between him and another guy, and I would have been dead. A fourth of an inch in any direction and I would have been either dead on contact or just fine. Having been blessed with a higher red blood cell count than most people and the way I trained also saved my life during the first surgery a million times over. I don’t believe in coincidences” he added.

Ogar explained that it was his faith in God and knowing that God had a purpose for the situation that he was in that got him through the grueling six-week recovery at Craig Hospital near his home in Denver.

He always knew he wanted to help people, but he explained that after the accident his path to doing so became a lot clearer. He now knew the population he was meant to help was the adaptive CrossFit community.

Getting back to the sport he loved pushed him to get through the months following the accident. He would sneak out from the hospital with his friends and head to his gym to get a quick workout in.

Within the same year of being paralyzed, Ogar decided to take on something that had never been done by any adaptive athlete in CrossFit history; to become a member of an elite group of CrossFit coaches known as the Red Shirts. These coaches teach CrossFit trainer seminars. The Red Shirts are so elite that there are only 200 members in the world. The internship to become part of the team is so intense that only one out of eight applicants make the team.

Ogar’s biggest challenge came when having to teach movements like fronts squats and weight lifting movements to small groups during the internship process. He knew he needed to find ways other than demonstrating to showcase the movements.  He had to learn to describe movements in a way that would make sense to members.

The process took him four internships, but he made the team in late 2014. This marked a huge progression for him as a coach.  After his injury, he didn’t know if he would be able to do what he loved and be an effective coach. “Part of me wanted to prove that I could still be a good coach from a chair. It was my dream job” he said.

As a coach, Kevin Ogar works with newly disabled patients from Craig Hospital, the same hospital where he did his rehab. He works to challenge the perception the athletes have about themselves and the world around them. He explained that this has a lot to do with the attitude of the CrossFit community as a whole.

“There is no community out there like the CrossFit Community. We are all in complete support of each other. It is completely different than any other sport” Ogar said. “There is no “you can’t do that,” only a “let’s try.” Regardless of ability, skill or strength, you are one of us.”

Ogar said he works to get them to realize that they are not disabled people, but people with a disability.

Ogar has helped to reach more adaptive athletes around the world. He co-wrote the curriculum for the adaptive training course for CrossFit. This seminar teaches coaches and athletes how to better work with adaptive athletes. The course also gives able bodied athletes a window into what it is like to have a disability through doing movements using one leg or side of the body to simulate being an amputee or having other disabilities.

The director of the @adaptive CrossFit, Alec Zirkenbach, explained what having someone like Kevin Ogar brings to these seminars.

“Kevin is the consummate fitness professional.  He has a wealth of personal experience as a top-level competitive athlete in multiple sports and also has dedicated himself to exploring and learning from any source possible. Kevin has an upbeat, positive demeanor that always makes working the Adaptive Training Course seminars fun and exciting. His genuine enthusiasm for the course content and the trainers we serve is clear for anyone to see.“

When Kevin Ogar is not coaching, he is competing. This is nothing new. His first competition as an adaptive athlete came only a year and four days after being paralyzed. For him, competing was always something that he needed to do.

Every year CrossFit has a competition called The Open. This is an event that any athlete can compete in and try to qualify for the CrossFit Games.  Right after the injury, Ogar saw competition as a way to prove to himself that he could still do what he loves.

“It’s something that has kept me positive. If I could just do one rep of an RX (prescribed) score, or even a scaled score, that is huge. It is something that I really enjoyed, how to figure out how to do it.”

Ogar has not just been competing in CrossFit, he has brought his talents to the international stage as a member of the USA Paralympic powerlifting team where he competes in the bench press. Here, he has a max press of 180 K or 390 LB and a touch and go of 430 lb.

People may wonder how it is possible that a man who had his life turned upside down by a freak accident could accomplish so much in such a short period of time. His success may have something to do with the way he views his life post-injury.

Soon after the accident, Ogar was given a piece of advice from a doctor who he only refers to as “He-Man” because of his huge muscles. He-man told him to stop thinking of his life as linear but rather as a bouncing ball.

“Its ok for the ball to hit the ground. You don’t have to worry about those days, as long as the ball bounces back up to the same level or higher. It’s when the ball doesn’t bounce back to the same height or stops bouncing at all. That’s when you need to reach out for help.”

This is the same advice Ogar gives to the members of the nonprofit he and his friends started called The Reveille Project.

This organization offers a scholarship for veterans with physical disabilities or mood disorders that covers a year at a CrossFit gym, four physical therapy sessions and monthly nutritional planning. The program also encourages faith based action projects, or community give back projects, to get the vets involved in the community. If you would like to donate, refer a veteran or get more information, click here.

Kevin Ogar has always wanted to help people. Through his injury he has been able to help more people then he could ever imagine.