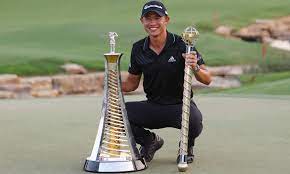 Thanksgiving is a time when Americans gather around the dinner table for great food, family, and Football.  As we sit with our stomachs full,  surrounded by friends and family, it is a time to reflect on what we are thankful for. Just four days before Thanksgiving, Professional Golfer, Collin Morikawa, gave an important reminder of what the holiday season is about after a historic win at the DP World Tour Championship in Dubai earlier this week.

At 24-years-old, Collin Morikawa is proving that he is a force to be reckoned with on the golf course. The former University of California Berkeley Golden Bear made his professional debut in 2019 and secured membership on the PGA Tour shortly after. Morikawa started off hot as a tour member, making the cut for his first 22 events. Only Tiger Woods has a longer streak, at 25 events. In August 2020, Morikawa became the third-youngest player ever to win the PGA Championship at just 23 years old. In 2021, he continued his strong play, winning both the WGC-Workday Championship and the Open Championship.

On November 21, 2021, he added another tournament win to his resume when he won the DP World Tour Championship, becoming the first American to take first place on the European Tour. Going into the last day of play, Morikawa was trailing then-leader Rory McIlroy by three strokes but erased the deficit by birdieing five of the last seven holes to secure the victory by three shots. When asked about his history-making victory, Morikawa  said,

“It’s an honor to be the first American to do that, to put my name against many, many greats and Hall of Famers. It’s special. I get touched up just talking about that.”

After the win, Morikawa had an important message for his family and those watching at home.

Morikawa gives us a great reminder to take a step back this holiday season and be thankful for what truly matters, the people who make the holidays special.