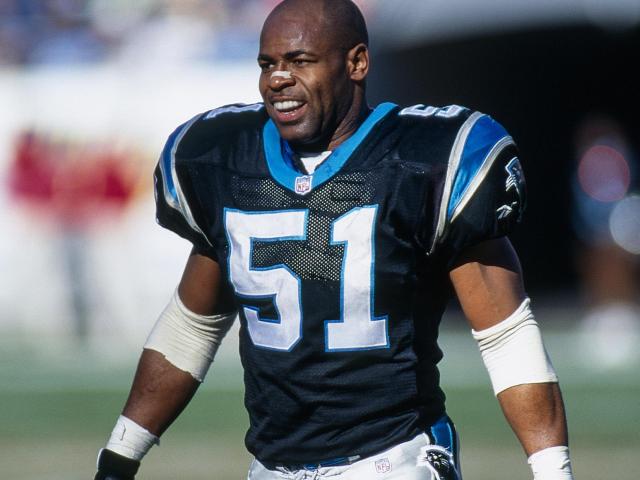 When I found out I had cancer, there were two things I could do — quit or keep pounding. I’m a fighter. I kept pounding. You’re fighters, too. Keep pounding!”

Sam Mills spoke these words before the Panthers faced the Dallas Cowboys in the NFC Wildcard Game in 2003, rallying his players to reach the team’s first Superbowl in franchise history, Almost two decades later the man who coined the “keep pounding” mantra has been immortalized forever in the NFL Hall of Fame. Although his football career will now be remembered forever in the hallowed halls of Canton, Ohio, it was his ethos as a person that will leave a mark on the hearts of his coaches and teammates forever.

The Journey
Standing at 5 foot 9, Sam Mills was considered too small to play college football. Coming out of high school, Mills went to Montclair State, a division III school in North Jersey. By the end of his career, he proved he belonged in college football, breaking the school’s record for career tackles with 501.
After college, Mills was cut by the Cleveland Browns and Toronto Argonauts before returning home to New Jersey to become a high school football coach and photography teacher.
In 1983, Mills made the roster of the USFL’s Philadelphia Stars. As a member of the Stars, Mills made three all-star teams while playing in the USFL. In 198,6 Mills got his first start in the NFL, playing for the New Orleans Saints and later the Carolina Panthers. By the time his career had come to a close, Mills had been named to five Pro Bowls and made a name for himself as one of the best linebackers in the league. To read more about Mill’s story, click here.

Mills was always one of the best players on the gridiron, but he was an even better person to his teammates and coaches and anyone who had the pleasure of knowing him.
“I would feel sorry for anyone who never met him” (Mills ), college teammate and Defensive Tackle Mike Popeck told Greater Than The Game. “They lost an incredible opportunity to see one of the best people that I have ever known in my life. As far as being a generous person, a kind person, a caring person, a great friend, a great family man, a great teammate, a great leader, there are not enough greats to put in front of his name.”

On the field, his ferocious tenacity and competitiveness was matched with a blend of compassion and humbleness towards teammates and coaches. Teammates recall how his leadership style was always constructive, not destructive, even when mistakes were made.

Coach Giancola, the Offensive Line Coach at Montclair during Mills’ tenure, explained that his leadership set an example through his actions, not his words.

“He had that inner leadership. He wouldn’t yell and scream. He would always try to perk them up. I learned a lot from being around him by the way he interacted with his teammates and coaches. He was always well respected, and he always gave respect.”

A Hall of Fame Person

With the kind of player, he was on the field and the person he was off of it, it was a no-brainer for him to be inducted into the NFL’s Football Hall of Fame with the class of 2022.
Check out the video below where Mills’ wife, Melanie Mills, explains the impact of the player and person, Sam Mills.

In the nearly 20 years since his death, Sam Mills has still found a way to inspire others with the Keep Pounding Fund, which has raised over 4.4 million dollars for cancer research. Mills’ football legacy will be preserved in Canton, Ohio, but who he was as a person will live on in the hearts and minds of the friends, family and teammates who knew him.