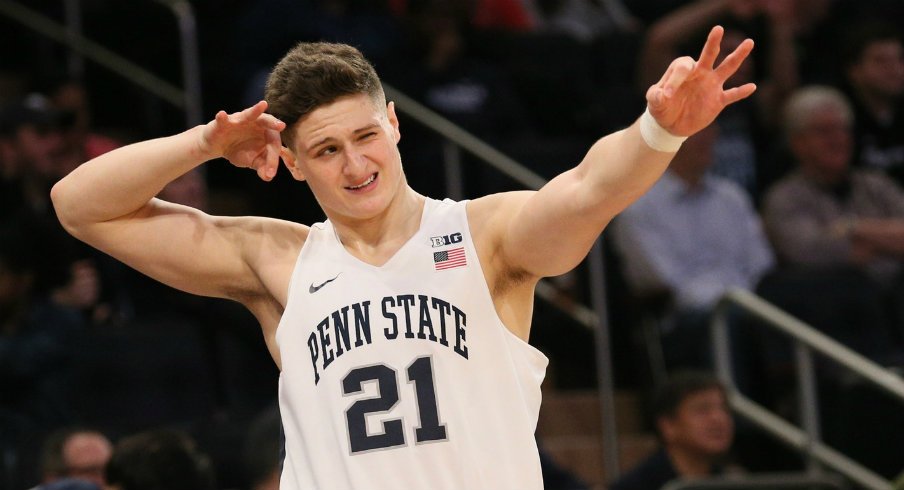 With just under a minute and a half to go in the second round of the Big Ten tournament, Penn state Senior forward John Harrar used all of his 6-foot-9 frame to sore above the outstretched arms of three Ohio State players to secure an offensive rebound and lay the ball off the glass to extend the No, 11 ceded  Penn state Nittany lions, lead to four over the 6 ceded OhioState buckeyes. This hard nose play to help his team close out an upset victory speaks to who he is both as a player and person.

When John Harrar arrived on the Penstate campus in 2017 he knew the road to crack the starting lineup wasn’t going to be easy but, he was up for the challenge.  Harrar grew up loving sports, following in his older brother’s footsteps playing multiple sports from a young age. For the Harrars sports was a family affair with both boys playing a sport nearly year-round and their father Jim coaching.

By the time John Harrar reached his junior year of high school college offers started to roll in for prowess as a football player.

he verbally committed to Army as a tight end but decommited soon after to pursue a career in basketball. The only problem was he had no offers.

Growing up in Penslivina Harrar was determined to play for the state college. He landed a tryout with the team and played well enough to earn him a spot as a member of the 2017 recruiting class.

In his freshman season, He made an impact. He appeared in 27 games for the Nittany Lions. Starting in the last three games of the season, after an injury to the team’s starting center. Harrar  played a key roll in the teams 2018 NIT championship and was given the

Lou Lamie “Most Inspirational” award at the annual banquet for preparedness and work ethic. That work ethic would mold him into a star for the team over the next four years. With an extra year of eligibility due to the Covid pendemic Harrar returned to Happy Vally for a fifth season in blue and White under the tutelage of the new head coach Micah Shrewsberry. In his final season at Penn state the team went 13-17, Harrar lead the team in field goal percentage and was a force in the paint averaging a double-double in eight games this season. In the Big Ten tournament, Harrar helped lead his team to victories over Minnesota and an upset victory over sixth-ranked Ohio State. In that game he had a number of key hustle plays to help come away with the win, including an offensive rebound and putback to help seal the game.

“You know he makes plays like that every single game for us. That’s who he is. Unbelievable for a guy to play like how he plays, get ready to play all day today and then come out and play, you know, 31 minutes, 31 minutes as hard as he plays on both ends. They’re going at him in the post with Joey Brunk and he’s fighting down there, then he’s sprinting to the other end of the court, now he’s sprinting back up and setting ball screens and rolling to the rim as hard as possible, going for the offensive rebound and then sprinting back on defense. And then late in the game they go small and now he’s got to guard E.J. Liddell and just his communication, he denied him one time and tried to push him further out on the court. Like you can’t talk — you can’t say enough things about that kid. There’s a lot of things that you can say, how great of a player he is, how great of a person he is, but unbelievable will and fight. He’s one of the toughest dudes I’ve ever been around.”

This season Harrar was determined to make a difference on and off the court. On  Senior Night Harrar, gave a special fan a night they would both remember. Declan Homan is a nine-year-old cancer survivor who loves Penn State basketball. The two met earlier this year and Harrar made sure that Declan would be in attendance for the game. Harrar also wore special shoes as a tribute to Homan. Check out the video below to see the special bond between the two.

In his last game at the Bryce Jordan Center  Harrar had a career-high 20 rebounds and 11 points in a seven-point victory over  Northwestern.

After the game, he told reporters that he wasn’t done just yet and had more to give to the school. That attitude was on full display as the Nittany Lions made a surprising run during the Big Ten tournament falling just short of  of the third-ranked Purdue in the Semi-final round.

Even though Harrar’s time at Penn State is over, his legacy will live on because of the way he conducted himself on and off the court. assistant coach Adam Fisher explained to reporters that the self-proclaimed zero-star recruit is now the prototype for what Penn State basketball is all about.

John gives everything he has, not only on the court and in practice, but in the classroom and in life,” he said. “He is a great listener and learner, which is such an important skill for a leader to have. John does everything the right way, in a first-class manner, and with respect, which is why whatever he chooses to do in life after he leaves Penn State, he will be successful in doing. John is and will always be one of the best representatives of Penn State.”