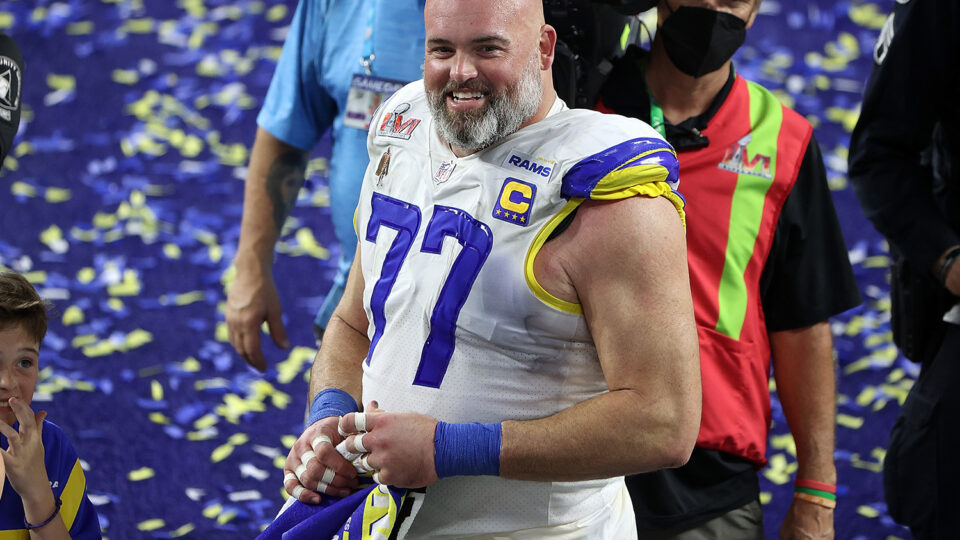 On February 10th Rams Offensive Tackle, Andrew Whitworth, walked on a stage at the YouTube Theater in Inglewood California to accept The Walter Payton “Man of the Year” award. Man of the Year is one of the NFL’s most prestigious awards and is given to a player who exudes excellence on and off the field. Three days later he was on another stage in Los Angeles holding a different trophy, the Lombardi Trophy. At 40 years old, the oldest tackle in the league is a Super Bowl Champion.

Andrew Whitworth was drafted out of LSU  to the Cincinnati Bengals in the second round of the 2006 NFL Draft. He spent ten years with the franchise becoming a staple on the offensive line. During his ten years in Cincinnati, he went to two Pro Bowls and was named a first-team all-pro twice. After the 2016 season, the organization decided to move on from Withworth who was deemed out of his prime at the age of 35.

He signed with the Rams where he has played the last five seasons, going to the Pro Bowl in two of those five seasons.

Throughout his career, Whitworth has made it a priority to serve in the communities where he plays. In 2008, he launched The Big Whit Foundation, a non-profit organization dedicated to impacting youth and their families. This year, he and his family wanted to help tackle homelessness in Los Angeles and in his home state of Louisiana. As part of his Big Whit Homes for LA  initiative, he donated $20,000 after each home game to help citizens of LA obtain affordable housing and partnered with other nonprofits to help Louisiana residents repair damage to their homes sustained during Hurricane Ida.

It was because of his great work that he was voted to be the 2021 Walter Payton Man of the Year. During his acceptance speech, he encouraged others to give back and make a difference right where they are.

Check out his amazing speech below.

In true storybook fashion, the Rams played the Bengals in Super Bowl LVI. The game was close but the Rams ultimately came away with the 23-20 win. During The Superbowl victory parade, Whitworth reflected on his departure from Cincinnati and had a message of hope for anyone who feels counted out.

“Five years ago, I was told I was a little too old,” Whitworth said. “I was told that maybe my time was done. And I tell you this, for every single person sitting out there, that’s ever doubted anything you’ve ever done, bet on yourself, because five years later, I’m holding this trophy up and I’m 40 years old. Let’s go. Don’t let anybody’s opinion of you ever become your reality. Bet on yourself.”