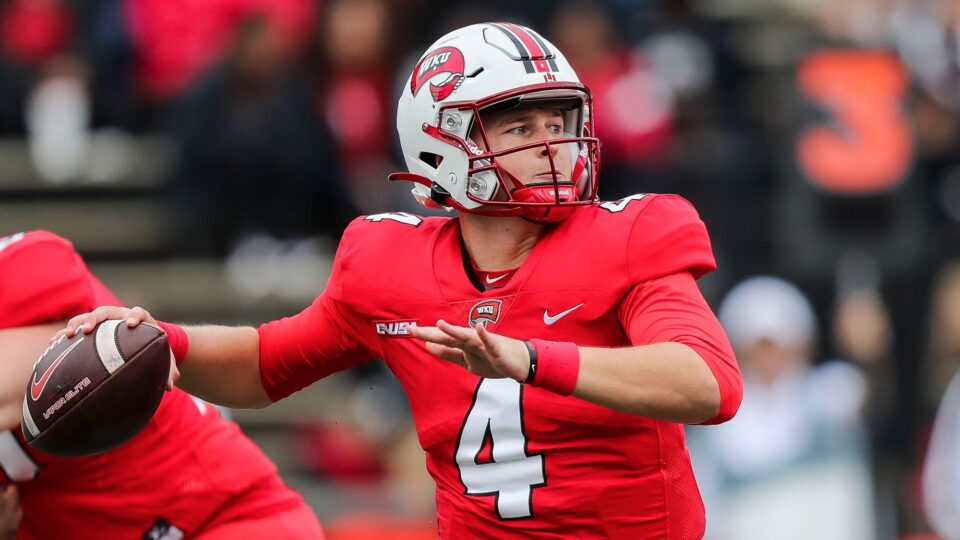 Every year three days at the end of April, the NFL Draft changes the lives of young men and sets the course for NFL  franchises for years to come. As always, pundits and fans were eager to see what quarterbacks would come off the board first. Of all the quarterbacks drafted, there was one who had one of the best statistical seasons in FBS history and, chances are, you have never heard of him. His name is Bailey Zappe and he is out to prove that he belongs in the NFL.

Who is Bailey Zappe?

A native of Victoria, Texas, Zappe was an outstanding high school quarterback at Victoria East High School where he was a three-year starter and threw for over 3000 yards and 15 touchdowns his senior year.

Despite these numbers, Zappe wasn’t highly recruited out of high school.

“He didn’t fit the prototypical mold that a lot of Division I schools were looking for,”  Roland Gonzalez, Zappe’s high school coach, told reporters. “He wasn’t that real tall quarterback that would sit in the pocket, and we didn’t run him a ton. That’s probably a big reason why he wasn’t heavily recruited because his numbers certainly warranted it.”

Out of high school, Zappe accepted the only offer he received to play football at the next level from Houston Baptist University.

“It [the game] was kind of a coming-out party for all of us,” Zappe said. “We put HBU on the map, put ourselves on the map. That game set it all off to where we started thinking, maybe we can go play at a bigger school.”

In just a four-game 2020 season due to Covid,  Zappe averaged 460 passing yards per game and threw for 15 touchdowns.

After the season  Zappe put his name in the transfer portal. This time, the recruitment process was different. Bluechip schools like Notre Dame, USC, and Tennessee were interested, but Zappe ultimately followed a host of teammates and his Offensive Coordinator to Western Kentucky University.

The Best season ever?

With the 137th  pick in the 2022 draft, the New England Patriots selected Zappe to serve as a backup to starting quarterback Mac Jones. Many analysts were surprised by the pick, seeing Zappe as a perennial backup in the league due to his athleticism and arm strength. However, Zappe seems unfazed by the doubters.

“I do not worry too much about the naysayers and critics,” Zappe told the Boston Herold.  “The Patriots believe in me, and those coaches, players, and organization believed in me and those are the people I’m going to try to prove right, that this pick was the right one.”

Bailey Zappe has been proving he was the right pick since he was a freshman in college. His journey to the NFL shows us that the beginning of the story never has to dictate the end.