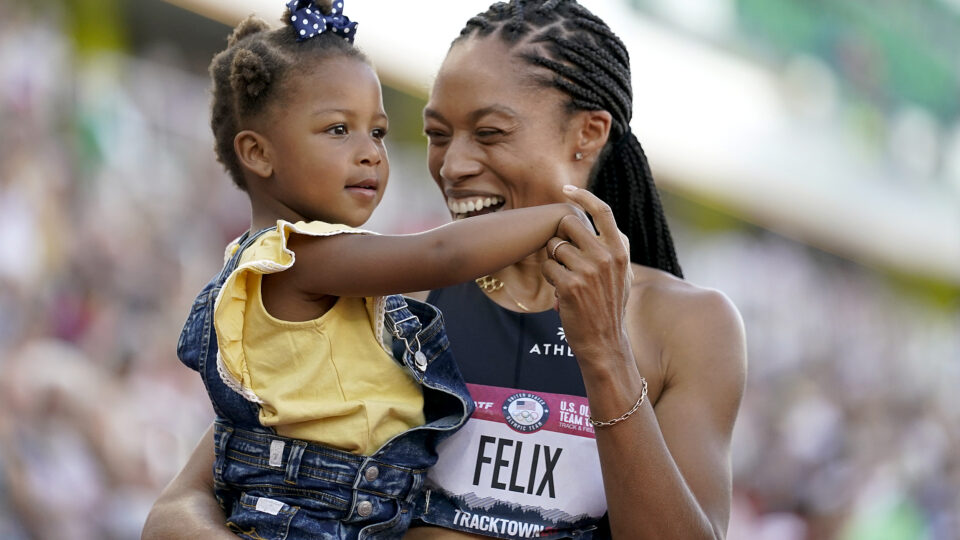 United States track superstar Allyson Felix has crushed world records and dominated in international competitions for almost two-decades. On Sunday, she qualified for her 5th Olympics, completing an astonishing comeback both on and off the track.

Felix has a laundry list of accomplishments. She first burst on the scene in the 2004 Olympics in Athens, Greece. At just 18-years-old she surprised the world by coming in second in the Woman’s 200 meters. Since then, she has earned 9 Olympic medals, tying Merlene Ottey’s record for the most Olympic medals in  female track and field history. In her two-decade career, she has earned over 20 Metals on the International stage.

Of all  Felix’s accomplishments, being a mom has to be at the top of the list. In November of  2018, Felix celebrated the birth of her first daughter, Camryn. During the pregnancy, she was diagnosed with severe pre-eclampsia, a condition that causes high blood pressure and can become fatal for both the mother and the baby. At 32- weeks the doctor did an emergency C -section and delivered baby Camryn who weighed just over three pounds. The next few weeks were filled with uncertainty, not knowing if Camryn would be ok. After a month in the NICU, Camryn was released from the hospital and sent home.

With her baby safe at home, Felix had a new mission, to help others just like her who were going through pregnancy complications. She found that the US has the highest rate of pregnancy-related deaths in the developed world and that African Americans are 4 times more likely to have birth complications like pre-eclampsia.

In 2019, she told her story to a United States House Committee on disparities and social determinants in the maternal mortality crisis, and partnered with the CDC to  create a public health campaign to bring awareness to this issue.

When Felix was back on the track she faced a set of new challenges. In conjunction with getting back to her Olympic form, she had to deal with the business side of the sport. Felix wanted, in writing, that she wouldn’t be penalized financially if there was a dip in her performance post-pregnancy. However, Nike wouldn’t make that guarantee. In negotiations, they proposed a 70% pay cut. After public outcry, Nike changed their policy surrounding pregnant athletes giving them 18 months of protection during pregnancy. Other big-name companies have followed suit.

In 2019, Felix decided to part ways with Nike. Two years later she would do something incredible; start her own women’s shoe company! On Wednesday, June 23rd,  she launched Saysh, where every product is designed by women.

Feilix explained in a post on Instagram, that she hopes the brand transcends sports and represents more than just a shoe.

On Sunday, June 18th, Felix had the opportunity to punch her ticket to the 2021 Olympics in Tokyo Japan. All she had to do was finish in the top three of the 400-meter finals at the Olympic trials. When the gun went off Felix was leading the pack, but quickly fell back to fourth place. With 50 meters to go she turned on the burners and closed the gap finishing in second place qualifying for her fifth Olympic games.

Fans and announcers alike were astonished at her comeback with such little time to go in the race, however, they didn’t know how powerful her “why” was for  making the Olympic  team.

“In that home stretch, I was thinking about all of the things before the race—the long days and the NICU and just the struggle to get back to feeling like myself,” she told Self.com after the race. “And I was like, I have to do this. I have to keep fighting. So having Cammy and thinking about her and the world that she’s going to grow up in and just all of that is just a different motivation: wanting to be a good example for her and show her that regardless of your circumstances you continue to fight.”

Allyson Felix  has fought extremely hard to get to her 5th Olympics. When she was faced with pregnancy complications, she created campaigns and talked to the highest levels of government to raise awareness of the problem. When she felt voiceless with sponsors, she started her own brand to inspire other women. When she was counted out of the race she kept on fighting. Allyson Felix is one of the greatest US Olympians of all time, but her impact is truly greater than the game.