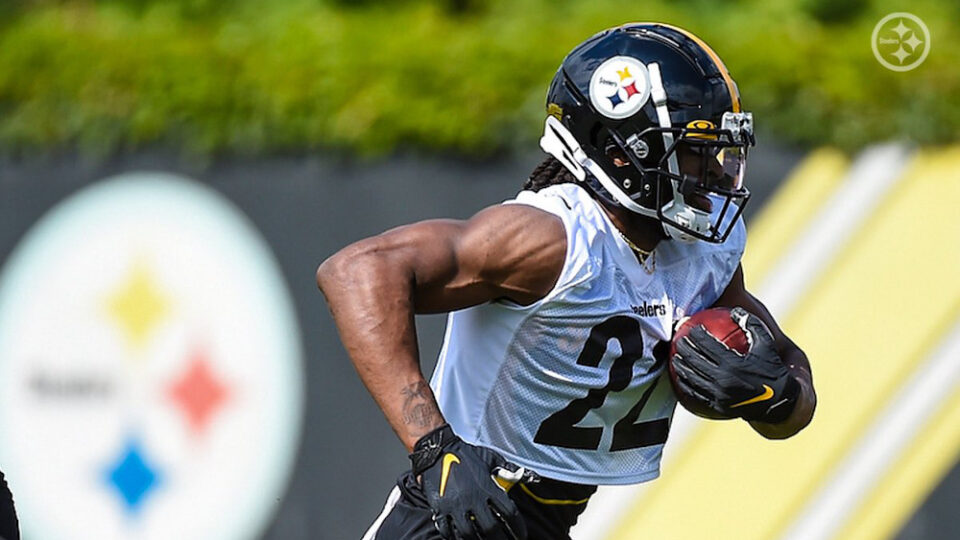 “Do not go where the path may lead, go instead where there is no path and leave a trail.”

Pittsburgh Steelers running back Najee Harris has been leaving a trail his whole life, just like his favorite quote from American poet  Muriel Strode, but he is not only leaving a trail, he is helping others to follow in his footsteps.

Standing at six-foot-two and weighing 230 lbs, Najee Harris is not your average running back. If you were to build the perfect prototype for this position, Harris would fit the bill. He is explosive enough to run in between the tackles, but can make you miss in the open field, oftentimes jumping over defenders with his patented Harris hurdle. But it’s the hurdles he has overcome off the field that has turned him into the person he is today.

Harris, his mother and his five siblings moved around a lot when he was growing up. Many times the family would stay in cars, hotels, and in shelters until they found permanent housing in the city of Antioch, California. Although the family now had a place to stay, it was in one of the worst neighborhoods in the city.  In an area rampant with crime and drugs, Harris found sanctuary at the high school football stadium just two blocks from his house.

In 2013, as a freshman in high school, Harris showed what he could do on the football field. After just two weeks on the JV team, he was called up to Varsity. It was at that time that he met his trainer and mentor Marcus Malu, who worked with Harris for the next four years and beyond.

From the time he was a freshman, Harris had a crazy work ethic. He would come in on weekends and stay late daily to make sure he got the most out of his body.  When he stayed late he would have to walk home through the dangerous streets known as “The Zone” to the locals.

Despite his off-the-field struggles, Harris would dominate while at Antioch Highschool. By the end of his high school career, he racked up 8,386 all-purpose yards, averaging 205 rushing yards per game,  earning him the title of the number one recruit for the class of 2017 and a full scholarship to Alabama.  Even with all his success on the field, Harris never forgot where he came from and always wanted to help those in need. His high school coach, John Lucido, recalled a time when Harris asked him “What makes you happy?”  Here’s what happened next.

As the number one recruit coming into Alabama,  Harris had to do something he wasn’t accustomed to. He had to sit on the bench. Although he played in every game his freshman season he wasn’t getting the playing time he wanted, but he stuck it out and his patience would pay off big time. In the 4th quarter of the National Championship Game, he got his opportunity and made the most of it. He led the Alabama backfield with 65 rushing yards on just six carries. He also added a 35-yard catch in the come-from-behind overtime victory against the  Georgia Bulldogs.

Over the next three years, Harris would become the work-horse for the Crimson Tide. By the time he graduated  he led the team in both career rushing yards with 3,843,  and touchdowns with 57, cementing him as a first-round NFL Draft pick.

Most first-round draft picks will spend the draft in the host city surrounded by family. friends and fans eagerly awaiting their name to be called. Once again, Harris was on his own path, watching the draft from a  Richmond, California, homeless shelter where he used to live.

When asked by San Francisco TV station KRON,  why he decided to have a draft party at a shelter, he told them,

“There was a time I needed a helping hand. They gave us an opportunity to get back on our feet,” Harris told the reporter. “So it is my job to give back.”

Hours later he was selected by the Pittsburgh Steelers as the  24th overall draft pick. As An NFL player, he continues to give back to the Bay Area. On May 29th, he officially launched Da Bigger Picture foundation,  a non-profit that focuses on assisting underserved families in reaching their potential and goals. The foundation’s hope is to provide tools and assistance to families facing challenging times. Some of the key areas of focus will be education, homelessness, addressing hunger, and utilizing sports as a platform to develop life skills.

Checkout his awesome announcement below.