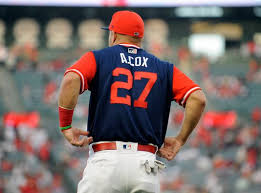 If you were looking for All-Star Mike Trout on the field in his first of the disabled list, you might have missed him, but not because he wasn’t there. You might have missed him because of the jersey he was wearing.
Last year,  created a campaign called “players weekend.” It runs from August 25th to the 27th and allows players from every team to wear personalized jerseys that are inspired by  Little League uniforms of wearing a jersey to represent himself, he paid tribute to his late brother-in-law, Aaron Cox, a former Minor League pitcher who died suddenly on August 15th at the age of 24. Wearing his brother-In-law’s name and number in last Friday night’s 8-3 loss against the Astros, Trout told reporters that he was emotionally drained.  This didn’t stop Trout from making his mark. In his first at-bat he clocked a stand-up triple! He finished the game going 2 for 4 with two runs scored.

Before Trout went on the DL he was on pace to have one of, if not the best, seasons of all time. This was calculated through a stat called WAR or wins above replacement. Basically, this measures how valuable a player is to his team. I implore you to read this article by ESPN that breaks down his season in these terms. It’s incredible ! With everything Trout has gone through in this past month, I am rooting for him to complete such an amazing season.
That’s it for this post. Be sure to like our Facebook page and to follow us on Instagram using the icons below.