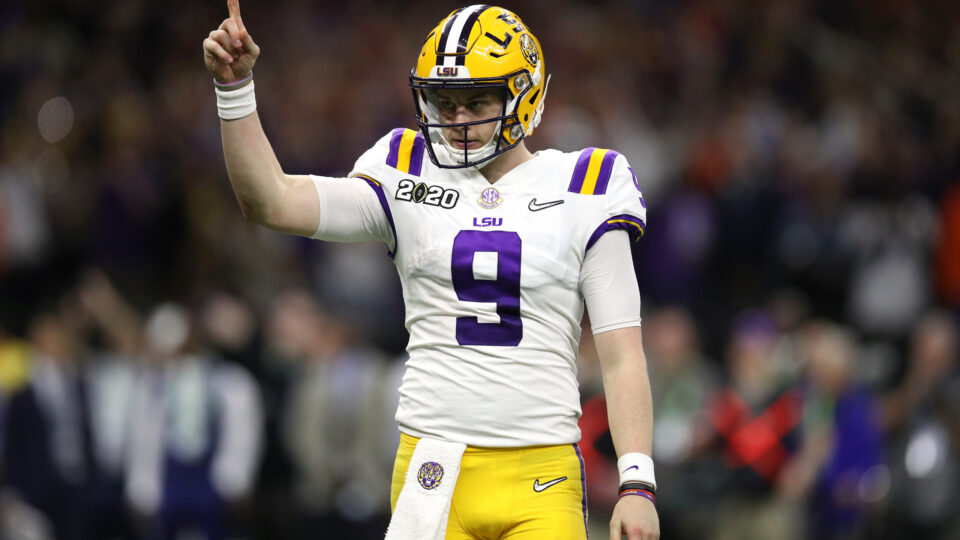 At the 2019 NFL Draft LSU Quarterback Joe Burrow was a spectator who was projected to be a sixth-round draft pick a year later. Fast forward to the 2020 NFL Draft, and Joe Burrow’s name was called as the first overall pick to the Cincinnati Bengals. How could this happen? What could cause such a meteoric rise? An undefeated season the Heisman Trophy and a National championship. The journey he took to accomplish these things however, wasn’t a typical one, but there is nothing typical about Joe Burrow.

For the Burrows, football is a family affair. Both of his grandfathers, his brother and his dad played college football at division one schools. It was his father’s career as a coach that brought Burrow to Athens county Ohio where he played football at Athens High School.  In his four years, he threw for over 11,000 yards and 157 touchdowns. He also rushed for over 2,000 yards. In 2014, he was named Mr. Football, an award that goes to the best football player in the state.

After high school, Burrow was recruited to Ohio State, where he redshirted behind J.T Barrett.

After seeing the writing on the wall that he wasn’t going to be the next man up, he decided to transfer.  He wanted to play at Nebraska like his father, but coach Scott Frost wasn’t interested.

Frost made that abundantly clear when he asked a reporter, “you really think he is better than what we have?”

After being recruited to LSU as a transfer, Burrow showed that he could be the quarterback LSU had been looking for. He led his team to a 10-3 record. That season he set a school record for being the first quarterback in school history to throw for over 2500 yards and rush for over 350 yards in a season.

In 2019, he built on what he had done the year before setting just about every record the school had. He threw for over 5000 yards, had a conference-best 60 touchdowns, and had an 89 percent winning percentage winning 25 of 28 games he started in his career.

Not only did he break school records, but he helped his team defeat Clemson to win the National Championship game.

With such a historic season, it was no surprise that he also became the 2020 Heisman Trophy winner.

Even with all his incredible accomplishments on the field, it was his Heisman speech that may stand out as his most memorable moment of the year.

During his Heisman speech, Joe Burrow took the time to talk about his hometown. He let the world know about the struggles that face the average person in Athens county, calling attention to the high poverty rate.  As a result, a campaign started on social media that raised 500,000 dollars for the Athens county food bank.

Last night, Burrow wore a shirt with his area code on it in homage to his roots. It is fantastic to see a young athlete use his platform to make a difference in other people’s lives. It will be exciting to see if the great LSU Bengal can help turn around a struggling Cincinnati Bengals team and live up to his nickname, the Tiger King.