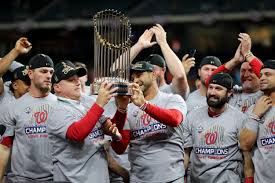 The Washington Nationals are the 2019 World Series Champions after defeating the Houston Astros in seven games. This is the first time in 86 years that a DC-based baseball team has won a world championship. Although it sounds cliché, this World series victory was improbable, to say the least, and here are some numbers to prove it.

With a 19-34 start to the season, the Nationals had the worst start of any team ever to win a World Series. How bleak did a playoff run look for the Nats? Well, they were the first team to ever come from 12 games under .500 and win the World Series. It’s like the old adage goes, it’s not how you start; it’s how you finish. The Nats won when it mattered, becoming the only team in MLB history to win three elimination games in the playoffs, thanks to players like Anthony Rendon and Howie Kendrick. Rendon became the third player since 1920 to hit 5 RBIs in an elimination game and Kendrick became the only player in MLB history with more than one go-ahead home run in the seventh inning or later of an elimination game within the same postseason. (stats via Washington Post )

The National’s pitching also had some records of their own. Nationals pitcher Steven Strasburg became the first No.1 pick to win World Series MVP. He also became the third player in history to win five games in the postseason. He and teammate Max Scherzer combined for ten wins this postseason. This is tied for the highest total by a pitching duo in MLB history.

No Postseason run would be complete without an impressive playoff beard. Baseball players are notorious for being superstitious, and that extends to the fans as well. Many fans, myself included, will not shave their beards while their team is in the playoffs in hopes that the increased facial hair will somehow translate into their team playing better. Nat’s fan B.J. Treuting, or “Bearded Natitude” as he has come to be known, has done the opposite of a playoff beard. In 2012, he decided not to shave until the Nationals won the World Series. Seven years and nine inches later, Treuting can finally be clean-shaven.

He told DCist.com that he planned to shave during the parade after the game seven victory. The only problem was that he now lived in Louisiana. Other Nationals fans had the idea for him to start a crowdfunding page to raise funds to go to the parade and get his beard shaved. He told supporters that whatever extra money he had leftover, he would donate to the Nationals Youth Baseball Academy, an organization that brings baseball to underserved kids in the DC area.  Within a few hours, he had enough money for a plane ticket, and $1000 left over to give to charity.

This World Series had it all for baseball fans, an improbable run by a team that everyone counted out, thrilling come from behind victories and money raised for a great cause. You can’t ask for more than that if you are a baseball fan.