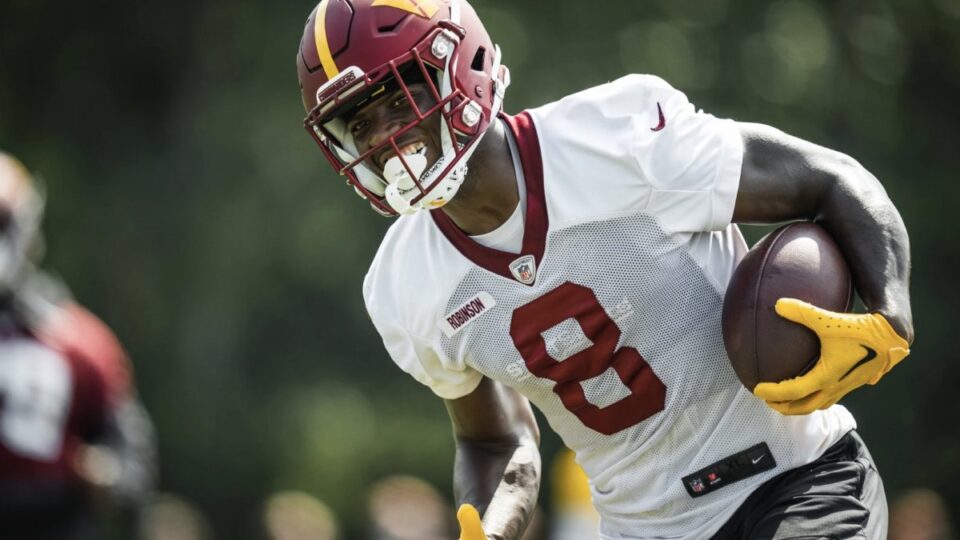 Brian Robinson Jr banged his fist on the side of the Washington Commanders tunnel and bounced around with anticipation as he waited for the signal to run on an NFL field for the very first time. His NFL debut came much later in the season than he anticipated when he was drafted 98th overall in the 2022 NFL Draft.  Six weeks prior, Robinson was lying in a hospital bed after being shot twice in the knee and hip during an attempted armed robbery in downtown Washington DC.

Once Robinson was out of surgery and in good health, his focus turned from survival to returning to the sport that he loved.  When head coach Ron Rivera visited Robinson in the hospital shortly after his surgery, he walked into the hospital room and found Robinson lying in the bed watching film. A day after being released from the hospital, Robinson was with his new teammates in the Commanders facility. A few weeks after the incident, he was ready to start rehabbing.

“Once the doctors told me I would be able to play ball again, then my mind automatically clicked into what I needed to do to get myself back on the football field,” he told reporters.

Robinson is no stranger to adversity. While at Alabama, he had to sit behind three different Runningbacks before getting a chance to be the featured back. It would take five years before he would have the chance to make a name for himself. By the end of his career in crimson and white, he would finish tied for 10th in school history for rushing touchdowns and 11th in career rushing yards.

Robinson told the Washington Post that he would consider himself the king of adversity after facing his toughest challenge yet. He explained that the key to his return to the field would be his belief in himself.

“I’m definitely ambitious, and I’m going to fight for anything I believe in,” he said. “If I believe that I can return back to the field and do what I need to do to the level that I want to do it, then that’s the steps I’m taking to put myself in that position,” he told the Washington Post.

That’s exactly what he did. His hard work landed him in the week 5 matchup against the Tenessee Titans, where he rushed for 22 yards on 9 carries. Check out Robinson’s mic’d-up return to the field below.

It wasn’t until the Thursday night match-up against the Chicago Bears that the Commanders were able to see the full impact Robinson could have in their backfield as he rushed 17 times for 60 yards and a game-winning touchdown.

In a post-game interview with the Thursday Night Football crew, Robinson reflected on all that he has been through in the past 6 weeks, explaining that it was the influence of his Mom and his belief in God that kept him going throughout this tough time.

“I truly believe that God’s got a bigger purpose for me, and I just gotta live through Him every day and I will reap the benefits of it.”

Robinson personifies what belief in yourself means and how it can make the least expected things happen. This belief has truly made him greater than the game!

Big Whit: The impact of Walter Payton Man of The Year, Andrew Whitworth