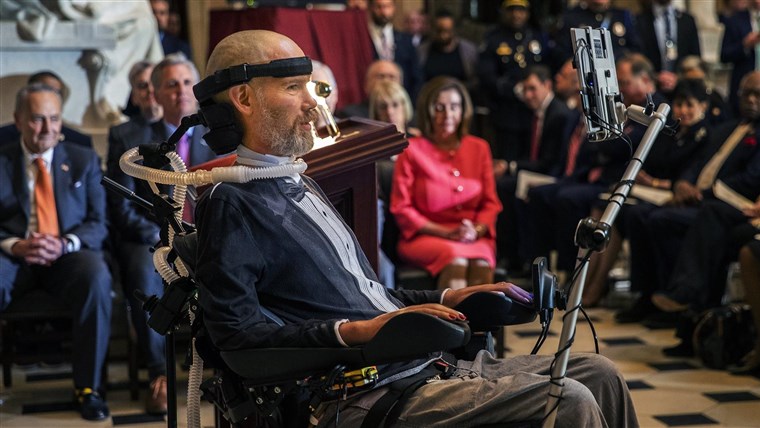 Cutting through the Andes mountains lies a 26-mile trail to the ancient city of Machu Picchu. To reach the dwelling place of the Inca gods, one has to transverse narrow goat paths and climb steep steps carved into ancient rock before arriving at the ruins perched 8000 feet above sea level. This trip is grueling for anyone. Now imagine making this journey with two people suffering from ALS.

This is one of many adventures organized by the Team Gleason Foundation. The organization is run by 2020 Congressional Gold Medal recipient and New Orleans Saints legend Steve Gleason. Gleason and his organization work to give people with ALS opportunities to go on adventures after they are diagnosed with the disease. The organization also works to improve technology and raise funds to find a cure.

The New Orleans Saints drafted Gleason in the 2000 draft. The former standout linebacker at Washington State was known for doing whatever it took to lead his team to victory and for his love of life.

For the Saints, he became the Swiss Army Knife of players, playing at safety and on special teams.

In 2006 in the Saints first game back in their stadium, the Super Dome, after the devastation of Hurricane Katrina, Gleason cemented his legacy in the city forever after he blocked a punt that got returned for a touchdown against the Atlanta Falcons. This was the first touchdown scored in the game.

This play meant so much to Saints fans that it’s immortalized in a statue outside of the dome.

No White Flags No Surrender

In 2011, Gleason was diagnosed with ALS, a degenerative disease that causes a person to lose control of their muscle function. After his diagnosis, he was determined to live life on his terms. He and his wife retrofitted a van, nicknamed the Iron Horse after Lou Gehrig, one of the first athletes to have ALS, and traveled the country with it. Post diagnosis he has become the proud father of two and has raised over $10 million to provide experiences and adaptive technology for ALS patients. His organization also created the Gleason House, a residential house that allows residents to live more independently through cutting edge technology.

The slogan of team Gleason is one of fierce defiance of the sickness. No white flags, no surrender. For the past nine years, Gleason has been fighting, showing the world that he will not quit.

As part of his fight, Gleason has been working on passing legislation to help those with ALS have access to eye-tracking technology. In 2018 Congress passed the Gleason Act. The legislation permanently ensures people living with diseases such as amyotrophic lateral sclerosis (ALS) have access to speech generating devices regardless of their setting, whether at home or a healthcare institution.

For his work, Gleason was awarded the Congressional Gold medal, the highest award a US citizen can be given. At the ceremony, Gleason gave a moving speech. WARNING grab some tissues.

In the speech, he gave these words of wisdom.

“I don’t see my story as a football story or even a ALS story but a human story. The truth is, we all experience pain in our lives, but I believe that the problems we face are  our opportunity to define our human purpose.”

Gleason could have stopped living life when he was diagnosed in 2011; instead, he decided to try to make life better for those who are fighting the same fight. He is the personification of the mantra, “No white flag, no surrender.”