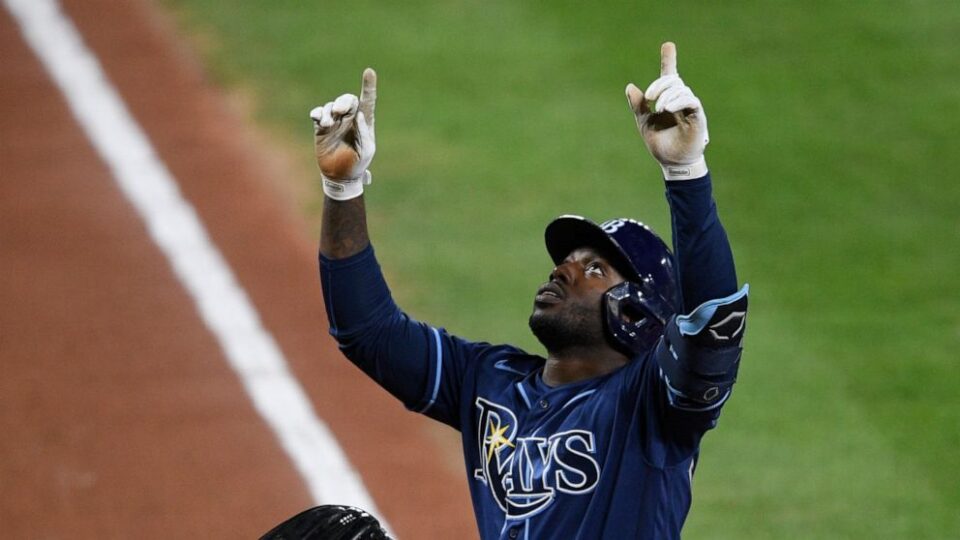 At 19-years-old, Ray’s Right Fielder, Randy Arozarena, found himself in the middle of the Gulf of Mexico in a lancha, or small boat resembling a raft. Arozarena was making the eight-hour journey with eight others fleeing to Mexico in search of a better life.  Arozarena knew that across the Gulf was his chance to achieve his dream of becoming a professional baseball player in the United States.

A year before leaving his home in Havana, Cuba, Arozarena lost his father due to a severe allergic reaction to seafood that he had eaten at the stadium while watching his son play in a playoff game for Pinar del Río, a professional team in Cuba. After his father’s death, Arozarena felt that following his dream of playing baseball in the United States was the only way to help provide for his family.

Once he reached Mexico, it took over a year for Arozarena to be eligible to sign with a major league team. In the meantime, he continued to improve his hitting and transitioned from second base to center field.

Welcome to the big leagues

In 2016, the St Louis Cardinals sighed Arozarena to a $1.25 million contract, but getting signed by a team was only the beginning of his journey. He still had to climb the ladder of minor league baseball and make it to the Majors, without knowing the language or having any family supporting him. On the field, he bounced around between double-A and Triple A ball before getting his first taste of the big leagues in 2019.

“The Minor Leagues were tough, but when I left Cuba, I knew what the struggles were going to be,” Arozarena said. “I started to get along with some of my Dominican teammates. And the teammates that didn’t speak Spanish, I would make them understand me. That gave me a lot of confidence, and then I was able to get through that,“ he told MLB.com.

Despite his struggles, he ranked as the 10th best outfield prospect in the Cardinals system. The Tampa Bay Rays took notice of his bat speed, overall athleticism, and power, trading for him in January of 2020.

A season to remember

Like everything else this year, the 2020 baseball season was kind of strange. The season was cut short by more than 100 games and was almost canceled due to many players getting COVID. Arozarena was one of these players.  He quarantined and missed the first month of the season.

He did what many hoped we could do and put his time in quarantine to good use. He was asymptomatic, so he was able to work out in his home. His routine included 300 pushups a day and a strict diet of chicken and rice because that was the only thing he could cook by himself.

By the time he returned to his team in August, he had gained 15 pounds of pure muscle!

The hard work paid off. In just 23 games this season, he hit a solid .281 and positioned himself as an everyday player in Tampa. By the end of the 2020 season, the Rays were poised to make a long postseason run after winning the Division and finishing with the second-best record in baseball.

A star is born

Arozarena had a great season with the Rays, but no one could have predicted how well he would play this postseason. Since the start of the playoffs, he has been playing like a man possessed. He leads all players who have at least 30 plate appearances in batting average with an average of .382. He also finds himself at the top of the list in runs scored , with 14, and in home runs with seven.

Over the past month, the Rays have been running on all cylinders. Their high octane offense, combined with excellent power pitching, has led the club to its first World Series since 2008. On Tuesday, October 20th, the Rays faced the LA Dodgers in Game One of the World Series.

Arozarena was in the starting line up as the designated hitter. In 6 years, he has come a long way from that lachada off the coast of Cuba and a life of great adversity, proving that with hard work and big dreams you can accomplish amazing things.