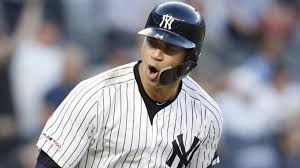 “I’d like to unleash the Kraken,” General Manager of the New York Yankees Brain Cashman said in a press conference in December of 2015. At this time, the world had just gotten a glimpse of the talent of Yankees catcher Gary Sanchez. The Kraken, as he would come to be called, had only played two games in the 2015 season, but it was clear that he would become a special player .

Fast forward four years later and Gary Sanchez has made history becoming the quickest catcher to hit 100 home runs. He did so in 355 games. This is a full 67 games ahead of the previous catcher and 100 home run record holder Mike Piazza. The homer came off of Dodgers Ace Hyun-Jin Ryu, In a 10- 2 victory on August 23. In his 355th game, Sanchez was just 30 games shy of the all-time record holder regardless of position, Ryan Howard.

Sanchez started to make waves in 2016 when he hit 20 home runs and had 42 RBI’s while playing in just 53 games that year. In 2017, he won the Silver Slugger award. In the same year, he also stepped up his defensive play, finishing second in the league in assists as a catcher. This is a play were the catcher touches the ball after it is hit and the out is recorded. He also had the highest caught stealing percentage of any catcher in the league that year.

In 2018, Sanchez fell off hard. He only played 89 games due to nagging injuries, he only had 18 home runs and 53 RBI’s and had a meager batting average of .186. At this time, his defense was also called into question after he led the MLB in passed balls two years in a row. After such a disappointing season it was unclear whether he would be able to bounce back.

Check out his highlights below !

The Return of the Kraken

In 2019 Sanchez has been a man on a mission. He has played in 89 games this season, has a batting average of .238 and has socked 29 home runs with 67 RBI’s to boot. He also stepped up his game in the field allowing only six passed balls and has a decent caught stealing percentage at 19 percent.
Sanchez’s rebound this year goes to show that one bad play, game, or season doesn’t have to define you. Its all about what you do with your next opportunity.